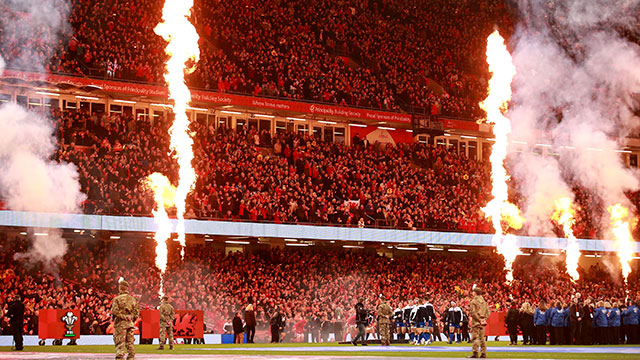 The Principality Stadium could be full this autumn (Adam Davy/PA)

Wales centre Jonathan Davies has admitted it will be “mind-blowing” to see the Principality Stadium full again for the Autumn Nations Series at the end of the year.

Tickets went on sale on Thursday for the home fixtures with New Zealand, South Africa, Fiji and Australia which take place across four consecutive weekends later in 2021.

While a limited number of spectators were able to witness the recent summer internationals against Canada and Argentina, those attendances of around 8,000 could be multiplied by nine when New Zealand roll into Cardiff on October 30.

Davies said: “That first game with a full stadium at the Principality, you want to be a part of that because it will be mind-blowing seeing thousands and thousands of people in the stands, singing Mae Hen Wlad Fy Nhadau.

“It is something you want to be part of as a rugby player and I am sure everyone will be competing hard to make sure they are in that team.”

Not since February 2020 have Welsh rugby supporters filled their home stadium, with the Six Nations games that year against Italy and France able to take place before the coronavirus pandemic.

Since then matches at domestic and international level have largely been played behind closed doors or with a small number of spectators, but that is set to change when Wayne Pivac’s team return to action in two months.

“The autumn itself is a huge opportunity to test ourselves against four of the best teams in the world,” the 87-capped Welsh back Davies added.

“Each team poses a different threat and we will be tested in all aspects of the game. The boys are going to be pushed hard but as a professional rugby player you want to test yourself against the best and those four games in the autumn will be a huge challenge for us all.”

Davies was a surprise omission from the British and Irish Lions’ recent tour of South Africa after he had starred on their trip to New Zealand in 2017.

Pivac handed the Scarlets centre the captaincy for the summer internationals, while regular skipper Alun Wyn Jones was with the Lions, and the 33-year-old led his country to victory over Canada, a thrilling draw in the first Test with Argentina before they lost the series when the Pumas won the final Test 33-11.

That final defeat of a long, arduous campaign, which had seen Wales claim the Six Nations title in March, occurred a week before the Lions series got under way, with the tourists going on to lose 2-1, but Davies spent much of his off-season in the Lake District and Scotland.

“I watched bits and bobs while we were in camp but I didn’t catch much of it,” he said.

“It is obviously devastating for the boys involved and hopefully they are able to have some time with their families now to decompress after what I can imagine was a very difficult tour. It can’t have been easy for them all.

“I am sure every Welsh rugby player wants to be involved in that squad. It adds to competition for places and I am sure the Welsh public are excited to get back in the stadium as well.

“Even in the summer games, 8,000 people in the stadium made a huge difference to the atmosphere and times that by 10… it is going to be pretty special, I have to say.”