Owens and Wales out to halt Fiji's 'X-factor' 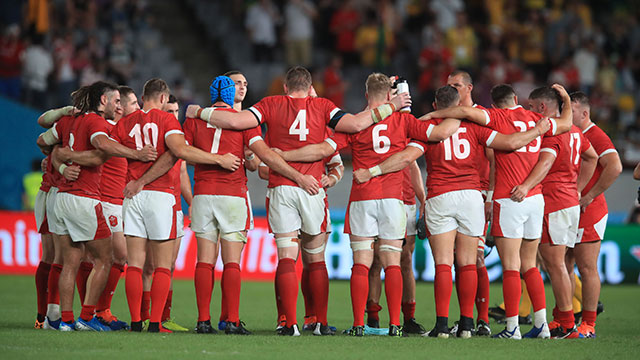 Victory for Wales in Oita next Wednesday would secure a quarter-final place with one game to spare.

They then complete Pool D by tackling Uruguay, before a potential quarter-final appointment with France or Argentina.

Fiji, though, are dangerous opponents, as a try-laden demolition of Georgia on Thursday proved.

Wales also have a painful World Cup memory of the Fijians, losing to them in 2007 and exiting the tournament as a result.

They avenged that result during the 2011 and 2015 pool stages, but Fiji have an ability to test any team.

"We are pretty happy, but we just need to keep that momentum going," Wales hooker Owens said, following victories over Australia and Georgia.

"It is great being two (wins) from two, but it doesn't mean much if we are two from four by the end of the pool.

"We have got to go on and get a result on Wednesday against Fiji, then against Uruguay. There are two massive games to finish this pool, and we are just looking forward to that."

Fiji's renowned handling and running skills were brilliantly showcased in the 45-10 rout of Georgia, never more so than when Leone Nakarawa and Semi Radradra created their final try for Api Ratuniyarawa.

"They (Fiji) were very impressive," said Owens. "I thought Georgia did very well the first 30-40 minutes and held them out.

"But Fiji have got quality players, a lot of X-factor, and the biggest message for us is stopping that threat and not getting drawn into playing the Fiji way.

"I think there was a statistic at some point where Georgia had off-loaded double the amount of times Fiji had, so we will have to be smart in the way we play.

"Our gameplan is going to be about stopping their X-factor players on the gain-line and stop them off-loading.

"I am sure they will be looking at us as a threat as well.

"We have got massive respect for Fiji, but we have got a lot of quality in our side. They will be looking at how they can stop us as well."

Wales' 29-25 success against Australia put them in charge of Pool D, and Owens added: "We were spot-on for the first 40 minutes. We got everything right.

"The second half, we defended more than we would have liked. That was down to Australia keeping hold of the ball and playing some very good attacking rugby, which is credit to them.

"In years gone by we would have lost those sort of games, but we have found ways to win big matches and that's what we did on Sunday. That was great."

And with momentum established, Wales could now take some stopping in terms of at least emulating their previous best World Cup performances, semi-finals in 1987 and 2011.

"There is still plenty of work to do," Owens said. "We would have liked to attack a little bit more in that second half, but we always get better the longer we are together.

"We are slowly building that momentum so there is a lot more to come, which is a great position to be in having had a massive win against Australia.

"That starts next Wednesday against Fiji, which is going to be another huge challenge in itself."

Wales fly-half Dan Biggar, meanwhile, is back in training after he failed a head injury assessment during the Australia encounter.