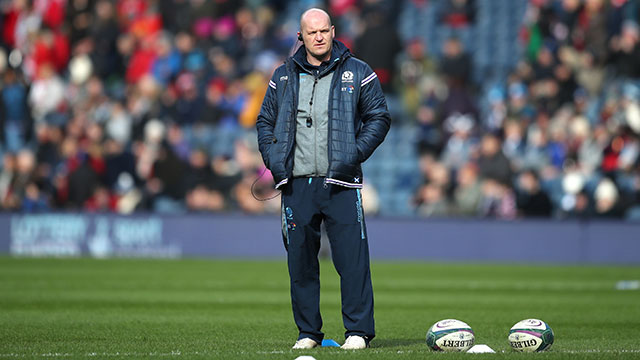 Northampton centre Hutchinson has had a breakthrough year for the Gallagher Premiership outfit and will now get the chance to book a seat to this year's finals in Japan.

Scarlets back-rower Thomson was due to make his Scotland bow during last year's autumn Tests but was ruled out through injury and has only recently returned to full fitness, while hooker Stewart has impressed for Glasgow over the past 12 months.

Townsend is keeping a further two spaces open to allow a number of players - including the likes of Richie Gray, Duncan Weir and Alex Dunbar, who were all overlooked - operating at the business end of the season to play their way into the group.

Guinness PRO14 title-chasers Glasgow contribute the most players to the training squad with 17, while Edinburgh provide 13 and clubs outside Scotland offer 12.

"Today's selection is a good indication of the depth and level of competition we currently have in Scotland," said Townsend.

"We made a conscious decision to keep squad numbers low, which enables us to do more work with those most likely to be on the plane to Japan.

"We're really excited to work with this group of players who will now compete hard for a place in the final 31-man group going to the World Cup.

"There are of course a number of very good players who have missed out - players who have been unlucky with injuries this year or haven't hit form at the right time - while others are unlucky to lose out on some very close decisions."

The majority of Townsend's squad will then be given three weeks off after the climax to the club season and will return from mid-June to intensify their preparations at Oriam, Scotland's National Sports Performance Centre, on the outskirts of Edinburgh.

They have planned three camps in Scotland plus a warm-weather trip to Portugal to prepare for their pool-stage campaign, that will see them take on Ireland, Russia, Samoa and hosts Japan once the competition starts in September.

Scotland will limber up for the tournament with four home-and-away summer Tests against Georgia and France beginning in August.

Townsend added: "Our goal is to deliver our best rugby on September 22 [when Scotland face Ireland in the opening pool round] and throughout the following few weeks, so there will be a big conditioning element driving us towards that.

"We've got to be ready to play with energy, huge effort and be fitter than every team we come up against. That will enable us to attack and defend at a high level and put pressure on the opposition."