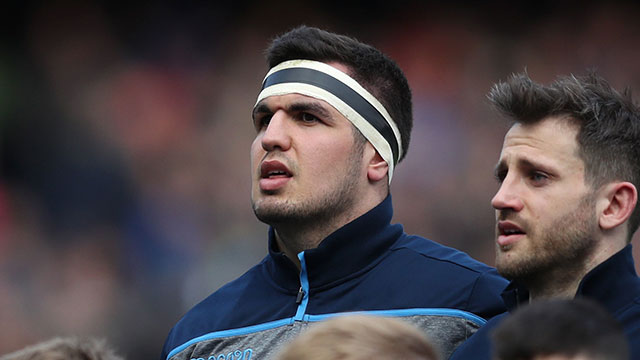 Huw Jones is the big-name omission from Scotland's World Cup squad while rookie centre Rory Hutchinson has also missed out on a seat on the plane to Japan.

Stuart McInally has been picked ahead of former captains Greig Laidlaw and John Barclay to lead the team out for their opener with Ireland in Yokohama on September 22.

But the major news surrounds head coach Gregor Townsend's decision to leave both Glasgow centre Jones and his midfield rival form Northampton Hutchinson out of the 31-man squad.

Jones burst onto the Test scene with nine tries in his first 14 appearances for the Dark Blues but in the 18 months since he scored a sensational double in the 2018 Calcutta Cup win over England, his form for club and country has dropped off considerably.

His deficiencies in defence have also counted him out of contention while a lack of experience appears to have contributed to the decision to leave Hutchinson behind despite the 23-year-old making a late bid for selection with a brace on his first Scotland start during Saturday's win in Georgia.

With fit-again Saracens centre Duncan Taylor and Sam Johnson of Warriors the leading duo to start in the midfield, Townsend has opted to take Peter Horne - who can also fill in at 10 - and Chris Harris as cover.

Adam Hastings has also been given the nod as back-up to star man Finn Russell at stand-off despite his ropy showing against France in Nice three weeks ago.

But Prop Jamie Bhatti has paid the price for his failure to impress during the five-try mauling inflicted upon his side at the Allianz Riviera, with Townsend deciding to take looseheads Allan Dell and Gordon Reid plus the tighthead pair of Willem Nel and Zander Fagerson.

Simon Berghan also gets a seat on the plane based on his ability to cover both sides of the scrum.

Forwards Josh Strauss, Matt Fagerson and Magnus Bradbury also miss out with Scarlets number eight Blade Thomson selected on the basis he can also slot into the second row if necessary.

Lock Bradbury has not featured at all during the Scots' three warm-up clashes so far due to a rib injury and his lack of action has cost him his place, even though fellow second-rower Jonny Gray and hooker Fraser Brown have both made the cut despite having also sat out the double header with France and last weekend's Tbilisi triumph through injury.

New skipper McInally, speaking as he and the rest of the squad were unveiled at Linlithgow Palace, said: "It's a very proud moment. I ended up missing the last World Cup through injury so this makes it all the sweeter.

"The focus is firmly on Georgia this Friday and putting in a good performance before we head off.

"I'm very fortunate that there is a number of players either side of me who have captained the team before so I won't be short in that regard.

"We're just going to take every game that comes and try to win them all. If we can get out of the group, it's knock-out rugby after that."