Gregor Townsend: A lot more to come from this Scotland team 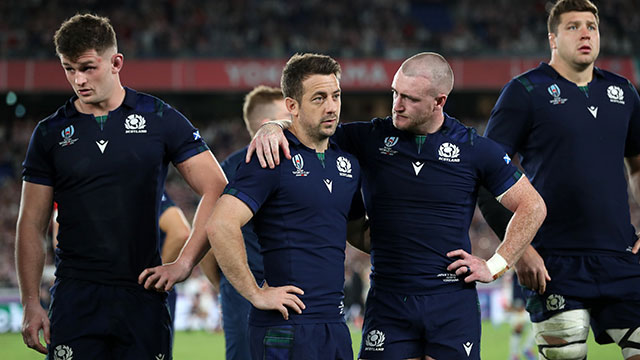 Scotland were dumped out of the World Cup (Image: David Davies/PA)

Gregor Townsend insists Scotland can recover from their World Cup heartache - but knows they must learn from the mistakes that cost them in Japan.

The Dark Blues crashed out at the pool stage for only the second time in the competition's history after a 28-21 loss to the hosts in Yokohama.

It was a another painful conclusion to a campaign that got off to a dismal start with the 27-3 thrashing from Ireland.

The Scots recovered from that huge dent to their confidence to nil both Samoa and Russia but their defence struggled to contain a rampant Brave Blossoms attack that for 45 minutes refused to relent with their ceaseless surges.

The hosts scored four tries in that period to kill off the Scots' hopes of reaching the quarter-finals as they instead set up their own knock-out clash with South Africa in Tokyo next Sunday.

But it is now back to the drawing board for Townsend and his side after a miserable 2019.

However, the head coach - whose side finished fifth in this year's Guinness Six Nations - said: "There's a lot more in this team.

"Experiences are what make you as a group and how you react to those experiences.

"It was a unique situation we were in tonight. We always knew it was going to be a challenge playing against Japan given our short turnaround from the Russia game.

"We had the team and we had the ability at the start of that game to go on and win it by the necessary amount of points.

"That we didn't is hugely disappointing. We have to learn from that. We don't get another turn at the World Cup for four years but we've got to improve as we get to next tournament which is the Six Nations in three months' time."

The build-up to the match was overshadowed by the threat of Typhoon Hagibis, with the clash at Yokohama's International Stadium only getting the green light eight hours before kick-off.

But Townsend refused to use that as an excuse for his side's defeat.

It looked promising for the Dark Blues when Finn Russell put them ahead early but Japan hit back with Kenki Fukuoka's double, plus scores from Kotaro Matsushima and Keita Inagaki.

Scotland refused to go down without a fight but second-half scores from forwards WP Nel and Zander Fagerson were not enough.

"The players acted very professionally," said Townsend. "We always believed the game was going to go ahead. Yesterday's training was compromised. We knew this week was going to be a challenge.

"We started well and then we didn't see the ball for the rest of the first half.

"We conceded two soft tries and we made too many mistakes. It made it difficult to get the result we were looking for.

"The boys put in a tremendous shift in the second half, but we didn't do enough in that last 20 minutes to get the win.

"It's a huge blow not to reach the knock-out stages, we came here with high aspirations.

"Getting out of the pool stages was the first part of that.

"We have worked incredibly hard over the last few months so we are all hugely disappointed."