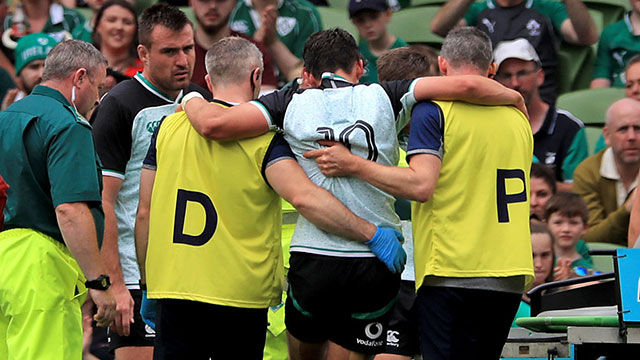 Fly-half Carbery will face an anxious wait to discover whether the injury will dent his World Cup hopes.

Premier playmaker Johnny Sexton is expected to be fit shortly following a thumb strain, but Ireland can ill afford to lose either of their main backline pivots.

Ireland will open their World Cup by taking on Scotland on September 22, so any significant ankle issue now would threaten Carbery's participation in Japan.

Connacht's Jack Carty and Leinster's Ross Byrne would be the men to understudy British and Irish Lions fly-half Sexton in Japan, should Carbery miss out through injury.

New Zealand-born Carbery offers Ireland added selection flexibility though, with the ability to cover full-back, and even centre at a push.

Chris Farrell increased his chances of World Cup travel with a smart showing at inside centre, but beyond that Ireland's coaching team were not handed many new selection headaches.

Ireland were sloppy from the start, a curious Carbery crossfield bomb from his own 22 an unusual - and unsuccessful - exit strategy.

Dave Kearney then botched a nailed-on try, knocking on at the whitewash when attempting to scoop up Carbery's hack through.

Carbery quickly levelled up the try count, cantering home through the 12 channel having traded places in Ireland's backline with Farrell.

But just when Ireland expected to pull away, the Italians inflicted another flesh wound.

Finally Ireland approached something resembling a rhythm, stringing the phases together deep in Azzurri territory.

Dave Kearney made amends for his early howler with a neat finish in the left corner, that owed everything to Garry Ringrose's pass out of the tackle. It enabled Larmour to fire out wide, and Kearney junior did the rest.

Andrew Conway walked in a third at the death of the half, to leave Ireland leading 19-10 at the interval.

Both sides meandered through an utterly-forgettable third quarter, save for that worrying injury to Carbery.