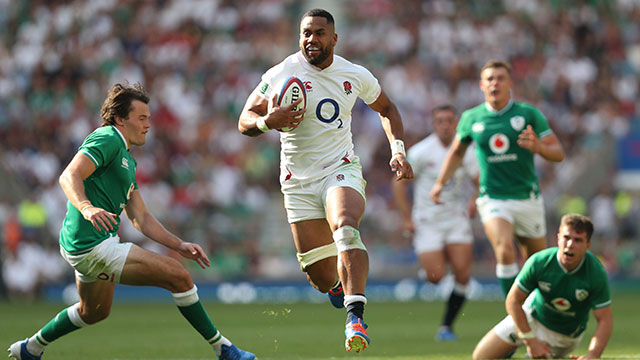 England issued a powerful statement ahead of the World Cup by overwhelming Ireland 57-15 at Twickenham in a victory that set records for highest score and greatest winning margin against their Six Nations rivals.

At the heart of a second triumph of the summer's four warm-up Tests was man of the match Tuilagi, who bristled with power and intent that tormented a vulnerable Irish defence that fell to pieces in the second-half.

It was Joe Schmidt's team who took first blood through an early Jordan Larmour try, but their hopes of clinching the win that would lift them to the summit of the global rankings at the expense of Wales quickly disintegrated.

The greatest danger England faced was not from impotent Ireland but sunburn as Twickenham roasted in temperatures that peaked at 30 degrees, yet they were well equipped for broiling conditions having spent 10 days in a heat camp in Treviso.

Maro Itoje and Billy Vunipola were magnificent up-front, while George Ford is arguing a strong case to reclaim the fly-half duties for the World Cup, but players excelled across the whole starting XV.

While England fans will be daring to dream what could unfold in Japan this autumn, their Irish counterparts must be questioning whether a team that laboured to third place in the Six Nations are in full reverse.

And to add misfortune to misery, they also came off worse on the injury count as Cian Healy suffered an ankle injury before Conor Murray was withdrawn at half-time having earlier passed a Head Injury Assessment.

Mako Vunipola followed them into the stands late on, however, as his comeback following four months out with a hamstring injury took a worrying twist.

It started so promisingly for the visitors as Iain Henderson's rip of English line-out ball, coupled with a kind bounce, launched their challenge in thrilling fashion.

A kick and chase down the left wing by Jacob Stockdale appeared to be covered by three defenders only for Tuilagi, Daly and Cokanasiga to be wrong-footed when the ball landed and flew over their heads for Larmour to gather and score.

England's ingenuity in midfield, assisted by Jonny May coming off his wing, allowed Cokanasiga to reply with an injection of pace rather than his power sweeping him over.

Ross Byrne's penalty nudged Ireland back in front but they were unpicked for a second time in the 29th minute as they fell victim to a combination of crisp off-loads, power and the speed at which the ball was dispatched wide.

Tuilagi was the main source of go forward with two imposing runs and he also provided a flick on before the over-stretched defence cracked when Daly strolled across the whitewash.

Evidence of an impending rout came with England's third try, a simple score from a five-metre scrum that Ireland should have stopped before Tuilagi raced over.

It was all too easy as Itoje became the next to capitalise on feeble defending as he took Ben Youngs' pass following a series of drives and touched down.

Once Kruis had squeezed the ball over the line for the fifth try, referee Nigel Owens wanted to see replays of a crunching Tuilagi tackle on Larmour but correctly decided there was no foul play.

England's 'Kamikaze kids' - the term Eddie Jones used to describe flankers Curry and Sam Underhill who were starting in the same back row for the first time - combined for Curry to touch down.

A scrum move saw a huge gap open up for Cokanasiga that the Fijian-born powerhouse eased through before dummying and scoring.

Bundee Aki showed his pace to stem the flow of points but Luke Cowan-Dickie grabbing an over-throw at Ireland's line-out and helping himself to five points summed up the visitors' dreadful afternoon.