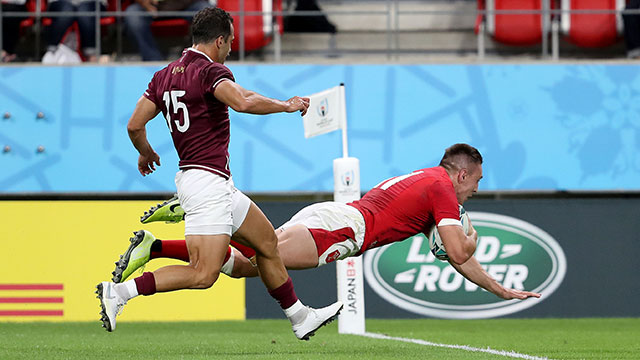 Wales launched their World Cup campaign in bonus point fashion by seeing off Georgia 43-14 at City of Toyota Stadium.

The Six Nations champions delivered a strong statement of intent less than a week before tackling Pool D rivals Australia as they put Georgia to the sword during a dominant first-half display.

And although the second period proved a much tighter affair - tries by hooker Shalva Mamukashvili and replacement prop Levan Chilachava accurately reflected a stirring Georgia recovery - Wales were never threatened.

Wales went into the game in the wake of assistant coach Rob Howley being sent home from Japan last week for an alleged breach of World Rugby's betting regulations.

Howley, 48, returned to Wales to assist with an investigation relating to a potential breach of World Rugby regulation six - specifically betting on rugby union.

But Wales showed no sign of a hangover from those difficult few days, blasting from their starting blocks and producing some high-tempo rugby that bristled with attacking verve, pinpoint accuracy and tactical authority to finish Georgia by the break.

It took Wales just three minutes to open their account, with Gareth Davies breaking quickly from a scrum and sending Jonathan Davies through a huge midfield gap.

Jonathan Davies finished with ease, and although Biggar somehow hit the post with his conversion attempt from straight in front of the posts, Wales were off and running, 5-0 ahead.

Biggar then made amends for his earlier blunder, kicking a short-range penalty that put Wales eight points clear after seven minutes, before Tipuric added a second try following strong running by Gareth Davies and Adams.

Wales were all over their opponents during the opening quarter, and it was no surprise when a second try arrived after 13 minutes.

Biggar's slick pass put Adams into space and - despite a supporting Gareth Davies being tackled - Tipuric gathered recycled possession and touched down, with Biggar adding the extras.

It was very comfortable for Wales, and Adams then finished brilliantly following a 40-metre run after Biggar's clever inside ball, and another successful conversion from the fly-half made it 22-0.

Georgia's trademark scrummaging power surfaced when they finally moved close to Wales' 22, but a lack of poise and precision with ball in hand denied them a chance to cut the deficit.

Wales finished a one-sided first half back on the attack, and a bonus-point try arrived when more impressive work by Jonathan Davies resulted in an opportunity for full-back Liam Williams that he gratefully accepted.

Biggar's successful conversion took it to 29-0, and Wales were out of sight with half the game remaining.

Georgia began the second period in lively fashion, reverting to a strong driving lineout, and Mamukashvili scored a try from one such show of power, before his replacement Jaba Bregvadze was sin-binned shortly afterwards for illegally halting a Wales forward surge.

Wales were given plenty to think about in the physical exchanges by Georgia, but a five-point maximum and no apparent injuries made it a case of job done.