Wales on top of the World after beating England 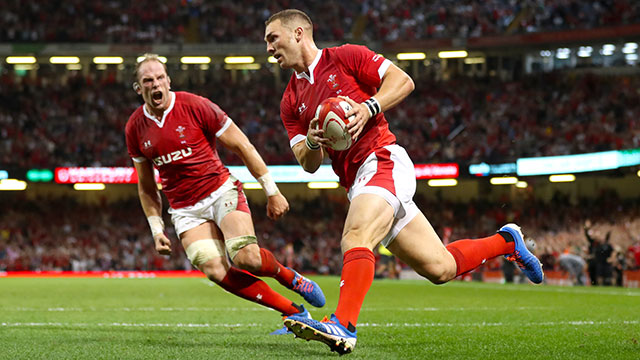 Wales' rise to the summit, which ended New Zealand's unbroken 10-year occupation, comes just 34 days before the World Cup kicks off in Japan.

It was an impressive warm-up performance for the tournament as they reeled off an 11th successive home win.

Wing George North's 34th-minute try sent Wales on their way to avenging a 33-19 defeat at Twickenham last weekend, while Dan Biggar converted and kicked a penalty to leave England 10 points adrift at half-time.

But there was an injury scare for Wales when Biggar took two blows to his left shoulder - he eventually went off five minutes from time - only six days after his fellow number 10 Gareth Anscombe suffered a World Cup-ending knee injury.

England were slicker and more cohesive after the break, but Wales restricted them to a couple of George Ford penalties before a late Leigh Halfpenny strike sealed victory.

Wales, though, had enough in the tank to close matters out ahead of a week's training in Turkey and resuming pre-World Cup action against Ireland in a fortnight's time.

England suffered a blow ahead of the game when wing Ruaridh McConnochie was ruled out because of a hamstring problem.

The Bath wing was due to make his Test debut, but his club colleague Anthony Watson replaced him.

And Wales were also forced into a late switch after full-back Liam Williams suffered a hamstring issue during the warm-up, meaning that Halfpenny was handed a first Test match appearance since November.

Wales made a high-tempo start, twice testing England full-back Elliot Daly under the high ball and looking to move possession wide at pace, before an eighth-minute fracas among the forwards ended with referee Pascal Gauzere warning and penalising Wales prop Tomas Francis.

It gave England some territorial momentum, with number eight Billy Vunipola and wing Joe Cokanasiga prominent, and there was a sign of Halfpenny's rustiness after such a lengthy international lay-off when he could not gather a steepling Ford kick.

James and Jonathan Davies, the first brothers to start together in Wales colours for 13 years, were at the heart of their team's attacking efforts, but a lively opening quarter ended scoreless.

James Davies went off after 24 minutes after it appeared that England lock Maro Itoje's knee accidentally caught him on the head, with Josh Navidi replacing him.

Biggar kicked a penalty to open the scoring, and England then had Watson sin-binned for a deliberate knock-on. Wales punished him before he had barely left the pitch.

Josh Adams made a break before possession found its way to Biggar, whose clever kick was caught by an unmarked North on the wing Watson would have been defending, before he touched down and claimed his 38th Wales try.

Biggar converted, with England seeing scrum-half Willi Heinz going off for a head injury assessment and being replaced by Ben Youngs and Wales securing a 10-0 interval advantage.

Heinz returned for the second period before Youngs took over from him permanently, while Aaron Shingler replaced an impressive Aaron Wainwright in Wales' back row and England prop Joe Marler also appeared for a first time since coming out of international retirement.

Ford kicked two penalties in six minutes to cut Wales' lead, but England could not breach the Welsh defence and they were left frustrated seven-point losers following Halfpenny's long-range penalty during the closing stages.