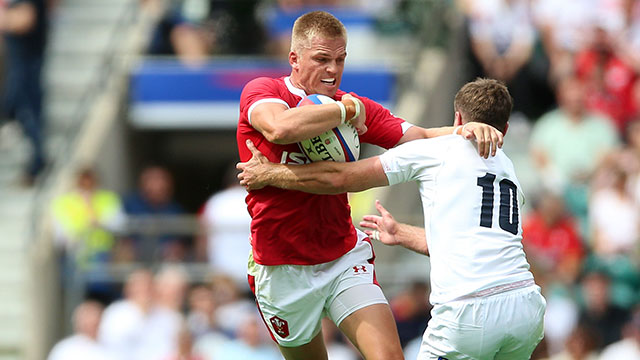 Wales have been dealt a second major World Cup injury blow with fly-half Gareth Anscombe being ruled out of the tournament.

He follows Bath number eight Taulupe Faletau, who suffered a broken collarbone during Wales training, in missing the competition.

The Welsh Rugby Union said: "Gareth Anscombe is out of Rugby World Cup contention after sustaining an anterior cruciate ligament injury in the match against England yesterday.

"His prognosis and management with be determined following further specialist reviews.

"The Wales squad and management would like to wish Gareth the very best with his recovery."

Anscombe, 28, was helped from the field just before half-time as Wales went down to a 33-19 loss.

He has won 27 caps, but now misses out on the chance to represent Wales in Japan.

Dan Biggar is the obvious candidate to reclaim Wales' number 10 shirt - he has won more than 70 caps and scored almost 350 Test points - with Rhys Patchell and Jarrod Evans also options.

Wales continue their World Cup warm-up Tests against England in Cardiff next Saturday, which is followed by home and away appointments with Ireland.

Wales head coach Warren Gatland is due to name his final 31-man World Cup squad on September 1, 22 days before a tournament opener against Georgia in Toyota City.