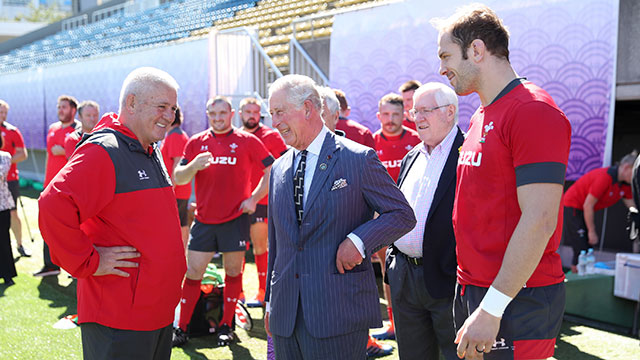 The Prince of Wales wished Wales' World Cup squad well during a training ground visit ahead of Sunday's semi-final against South Africa.

Prince Charles is in Tokyo for the enthronement of Japan's new Emperor Naruhito, and he spent around 30 minutes with the Wales players, coaches and management at Prince Chichibu Memorial Rugby Stadium.

Captain Alun Wyn Jones presented him with a signed Wales shirt, surrounded by his team-mates.

"Thank you very much," the prince said. "I am sure you will make us all proud."

It was also a day to remember for Wales squad newcomer Owen Lane, who only arrived in Japan on Tuesday as a replacement for injured back-row forward Josh Navidi.

All players from the 20 competing nations were presented with World Cup caps during welcome ceremonies at the start of the tournament, and 21-year-old Lane received his from the prince, accompanied by prolonged applause.

And before concluding his visit, he spoke with Welsh Rugby Union president Dennis Gethin, chairman Gareth Davies and Wales team manager Alan Phillips while the players trained in glorious sunshine.

"I have met him a few times over the years when we have won Six Nations Grand Slams and different things, and his two boys follow the rugby. It's just great.

"I was a bit cheeky this morning and asked him would he present a cap to Owen, and he said he would be absolutely delighted.

"Every time you meet him, you are impressed by him as a person. He is very humble, a quiet man and nice company."

Wales play the Springboks in Yokohama, 24 hours after England and New Zealand meet in the first semi-final.

Wales made the last four for a second time in the last three World Cups following a tense 20-19 win against France three days ago.

The World Cup final takes place in Yokohama on November 2.

Speaking at a press conference on Wednesday, Wales assistant coach Neil Jenkins said: "For him to come along was brilliant, and I am sure it will give the boys a lift.

"For us, it was just a great honour for him to be there watching us, and hopefully it will give us a boost for Sunday."