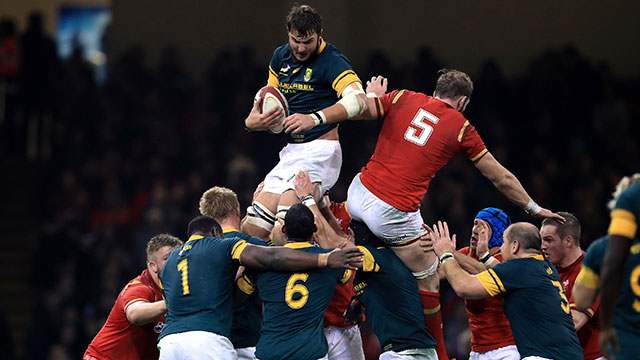 Wales beat the Springboks 27-13 during the 2016 autumn internationals

Wales play the final game of their autumn internationals on Saturday when they tackle South Africa in Cardiff. Here, we look at some key talking points ahead of the Principality Stadium clash.

Can Wales match positive rugby with a positive result?

Wales have displayed encouraging signs this autumn of putting more attacking width on their game, utilising to good effect midfield playmakers Dan Biggar and Owen Williams against Australia and New Zealand. It is very much a work in progress, but the bottom line is that apart from a dour victory over Georgia, Wales' miserable record against the southern hemisphere's top three - the Wallabies, All Blacks and South Africa - has continued through a 29-21 loss to Australia and 33-18 reversal at New Zealand's hands. It therefore ramps up the pressure for South Africa's visit this weekend, with a win being paramount.

Is Saturday's Test a game too far for Wales?

Wales' fourth autumn international - one that falls outside World Rugby's Test window - means they have lost four players back to Aviva Premiership duty, while injuries have also left a mark on head coach Warren Gatland's squad, with players like Jonathan Davies, Gareth Davies, Ken Owens, Jake Ball and Justin Tipuric all sidelined. Wales' recent home record against the Springboks is good, showing victories in 2014 and 2016, but they will have to dig extremely deep on Saturday to finish on top against a South Africa side fresh from beating France and Italy.

Will Hadleigh Parkes be a centre of attention for Wales?

New Zealand-born centre Parkes makes his Test debut at the earliest possible opportunity, completing a three-year Wales residency qualification only on Saturday. He has trained with Gatland's squad throughout the autumn campaign, and now his big chance arrives. He has consistently impressed in Europe and on a domestic stage for the Scarlets, and with star midfielder Jonathan Davies potentially sidelined through injury for the rest of this season, Parkes can put down a strong Six Nations marker on Saturday.

Which South Africa team will turn up?

South Africa have experienced a rollercoaster year, suffering comprehensive defeats against New Zealand and Ireland, but beating France four times and drawing with Australia twice. Like Wales, they are without key players this weekend - Francois Louw and Duane Vermeulen being the major absentees - but the Springboks will be hell-bent on avoiding a third successive defeat against their opponents in Cardiff. No-one expects South Africa to deviate from their trademark physical approach - it is likely to be an attritional contest, rather than a try-laden spectacular - but there remain question marks over them should they be put under pressure and potentially brittle confidence exposed.

No let-up for Wales as Six Nations looms

Wales' autumn campaign has seen them play three of the four Rugby Championship teams, plus unheralded Georgia, but hardly will the dust have settled than they will be focusing on Six Nations matters. And Wales will need to hit the ground running in European Test rugby's blue riband event, with their opening game being against a resurgent Scotland in Cardiff on February 3, followed by defending champions England at Twickenham seven days later. Gatland will hope to have a number of injured players back in action for those testing encounters as Wales target success in a tournament they have not win since 2013.