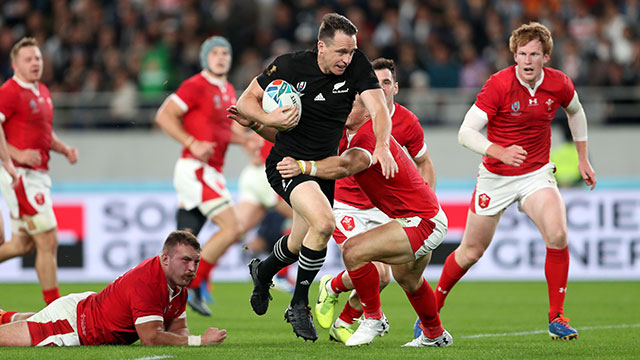 The All Blacks' 40-17 triumph consigned Wales to a fourth place finish for the second time in three World Cup campaigns under Gatland.

It also extended New Zealand's winning run against Wales to 31 Tests, having not lost in the fixture since 1953.

Wales countered through Hallam Amos' clever try and five points from Rhys Patchell, but centre Ryan Crotty's try and another Mo'unga conversion early in the second-half finished them off before Mo'unga added a late touchdown.

Wing Josh Adams scored a second Wales try, though, giving him seven in the tournament and breaking Shane Williams' Wales record for one World Cup campaign that he set 12 years ago.

Dan Biggar converted, leaving an under-strength Wales to take considerable comfort from a battling display that augers well for their future under Gatland's successor Wayne Pivac.

All Blacks boss Steve Hansen, who is also standing down after the tournament, included the likes of centre Sonny Bill Williams, wing Rieko Ioane and flanker Sam Cane.

The Wales players did not follow England's example in the semi-final last weekend of encroaching over the halfway line while New Zealand performed their pre-match Haka.

They faced it in regulation fashion standing on their own 10-metre line, but Wales were soon back-pedalling under pressure before Mo'unga hit the post with a straightforward penalty chance.

But the All Blacks struck after five minutes following a charge by lock Brodie Retallick that ended with Moody touching down and Mo'unga converting for a 7-0 lead.

Mo'unga again converted, and Wales were already hugely up against it, trailing by 14 points.

Wales continued to attack with freedom, and Patchell kicked a 27th-minute penalty that made it 14-10.

Wales' response to two early setbacks had been outstanding, and another pinpoint Patchell touch-finder took them back inside New Zealand's 22.

Both sides looked to attack at every opportunity, and New Zealand struck next when Smith worked his way over for a try, again converted by Mo'unga.

Wales continued to have plenty of possession, yet New Zealand finished the half well on top.

Smith sprinted over for a second try in five minutes, and another Mo'unga conversion made it 28-10 at the interval.

New Zealand had gone up a gear, and their fifth try arrived just two minutes into the second period, with Crotty crashing over and Mo'unga converting.

It looked like being a long second-half for Wales, and Gatland began making changes, with half-backs Biggar and Gareth Davies both going on.

New Zealand had the game done and dusted, though, to at least gain something tangible from a World Cup campaign that saw England end their hopes of a world title hat-trick.