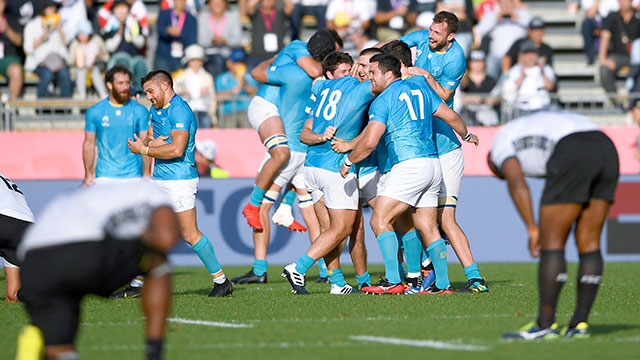 Uruguay pulled off the first shock of the Rugby World Cup with a stunning 30-27 victory over Fiji.

The South American minnows, who were playing their first game of the tournament, condemned the Pacific Islanders to their second defeat in five days to leave their Pool D qualification hopes in tatters.

Uruguay's thrilling upset was a fitting way to mark the opening of the new Kamaishi Recovery Memorial Stadium, which was built as a reminder to the people of the coastal fishing town which was almost wiped off the map by the earthquake and tsunami of 2011.

Prince Akishino, brother of the Japanese Emperor Naruhito, was in the 16,000-seater stadium to witness Uruguay's first World Cup win since 2003.

Uruguay scored only two tries in the whole of the 2015 World Cup but they had three by half-time in Kamaishi as they put the wretched Fijians to the sword.

Coach John McKee opted to field just three players from Fiji's opening game against the Wallabies but there was little hint of the drama to come when hooker Mesulame Dolokoto opened the scoring with an eighth-minute try.

A breakaway score from scrum-half Santiago Arata in the 13th minute shook the Pacific Islanders but loosehead prop Eroni Mawi restored their lead when he forced his way over for his first Test try and Josh Matavesi's conversion made it 12-7.

However, Fiji continued to come up with errors and were punished in ruthless fashion by their enthusiastic and energetic opponents.

Midway through the first half number eight Manuel Diana rumbled over for a try from a line-out and four minutes later centre Juan Manuel Cat finished off a sweetly-worked move among the outside backs.

Felipe Berchesi kicked his third conversion and added a penalty three minutes before half-time to stretch the South Americans' lead to 24-12.

Fiji led 21-12 against Australia only to lose 39-21, conceding 27 unanswered points, and had high hopes of turning the tables in similar fashion in the second half.

But the wayward Matavesi was wide with a penalty early in the second half and, although second row Api Ratuniyarawa burst through for a try, to give them renewed hope, Uruguay grew stronger.

A Berchesi penalty took their lead to 27-17 to equal their previous highest World Cup score and edge them closer to the unthinkable.

Replacement Nikola Matawalu peeled off a ruck to pull a try back after 66 minutes but Ben Volavola, who took over the goalkicking duties, missed the conversion to leave his side still trailing by five points.

Another Berchesi penalty kept the scoreboard ticking over for the underdogs and, although Matawalu went over for his second try in injury time to secure a losing bonus point, it was scant consolation.