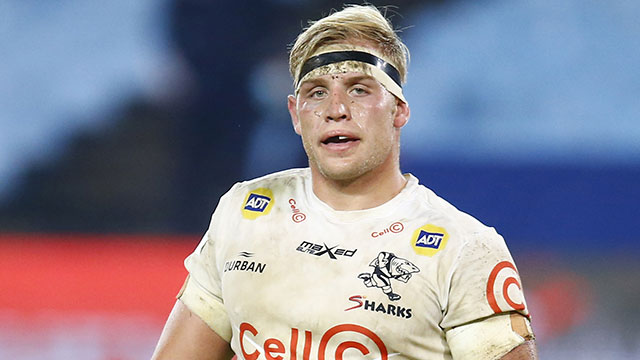 South Africa-born loose forward Dylan Richardson has been included in a 36-man Scotland squad for next week’s two-day training camp ahead of the autumn Tests.

With players based in England and France unable to be called up for this gathering, head coach Gregor Townsend’s group is made up almost exclusively of Edinburgh and Glasgow players, with the sole exception of 22-year-old Sharks player Richardson, who qualifies through his Edinburgh-born father.

The training squad will convene at Oriam on Sunday and Monday before Townsend finalises his squad next Wednesday for the autumn series, which begins against Tonga at Murrayfield on Saturday, October 30.

British and Irish Lions trio Ali Price, Hamish Watson and Zander Fagerson are all added to the group.

Townsend told Scottish Rugby: “It has been great to see both Edinburgh Rugby and Glasgow Warriors make positive starts to their URC campaigns, driven by some standout performances from both young and established players.

“With four tough Test matches ahead of us in this year’s Autumn Nations Series it is important we bring players together early, connect with them as coaches and enable them to grow as a group before the campaign gets under way against Tonga at BT Murrayfield.

“We are pleased with the depth we are able to call upon to make up this training squad and it provides a genuine opportunity for players to put their hand up for selection to the full Autumn Nations Series squad.”

Edinburgh scrum-half Ben Vellacott, who has made an excellent start to the season, is one of the most notable omissions from the group.