Injury concerns for Townsend as Scotland swat aside Georgia 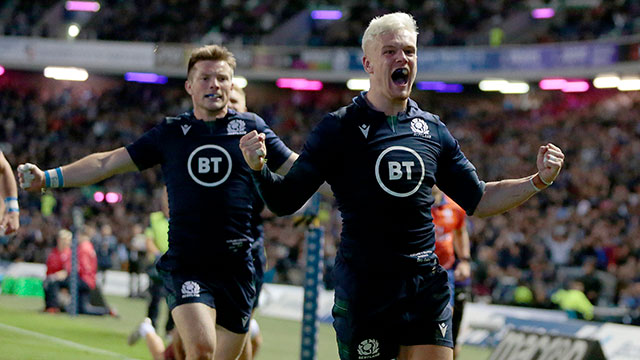 Gregor Townsend was left sweating on Ben Toolis' fitness after the lock suffered a worrying head knock near the end of Scotland's 36-9 win over Georgia.

The Dark Blues coach was hoping to see his team come through their World Cup send-off at Murryfield unscathed.

But Toolis' condition will now require assessing after referee Romain Poite was forced to halt play 15 minutes from time with the Edinburgh second-rower flat out on the ground.

The 27-year-old was taken for concussion tests but did not return and now faces an anxious wait to see whether he will be available for duty when the Scots kick-off their tournament against Ireland on September 22.

Tries from Ali Price, Blair Kinghorn, Sam Johnson, Darcy Graham, George Horne and his brother Peter saw the Dark Blues round off their warm-up schedule with a third straight victory.

But Townsend will know his team will have to sharpen up on their stuttering first-half display if they are to topple Joe Schmidt's team in a fortnight.

The Scotland coach left out a number of his key men, deciding their health was too important to gamble with.

Skipper Stuart McInally, Fraser Brown, John Barclay, Greig Laidlaw, Finn Russell and Stuart Hogg were wrapped in cotton wool as they ran out for the final time before departing for Japan on Monday.

Jonny Gray started his first warm-up clash as he returned from a hamstring strain.

However, he did not reappear after the break and the hope for the anxious Scotland faithful will be that the giant lock was only ever scheduled to play 40 minutes.

Townsend paired Duncan Taylor and Sam Johnson for the first time in midfield and while the centres showed glimpses that they can form an effective combination, there was once again concern around the set-piece as the Scottish pack toiled against the powerhouse visitors.

Both teams wasted early openings as they let the ball slip in sight of the whitewash.

But it was Lasha Malaghuradze who dropped the Georgians in it after 17 minutes when he fired a long kick straight into Kinghorn's arms.

The Edinburgh full-back was immediately on the charge, off-loading to club-mate Graham as he drove into contact.

At this point there was no stopping the Scots as Johnson, and then Price, timed their support runs to perfection, with the scrum-half sprinting into the corner for the opening score.

Tedo Abzhandadze trimmed the lead back with a penalty but Scotland had their tails up and struck again after 26 minutes.

Adam Hastings and Scott Cummings led the way as they stormed into Georgian territory. With penalty advantage Hastings went for broke as he chipped the ball out wide to Graham.

The little winger did brilliantly to stay in bounds as Soso Matiashvili flew in, looking to push him out, before lobbing a cute little pass back to Kinghorn for an easy finish.

But Hastings' failure to convert either of the tries meant Scotland's lead was not as big as it might have been and another couple of Abzhandadze penalties saw it trimmed back to one.

Both sides finished the half a man light as Poite grew fed up with the inability of both packs to hold up the scrum.

In a fit of pique, he sin-binned both Scotland tighthead Zander Fagerson and his opposite number Mikheil Nariashvili.

Toolis took over from Gray at half-time while Magnus Bradbury was also given a run out off the bench as consolation for missing out on Townsend's squad.

Scotland reapplied the pressure and struck again after 50 minutes. The forwards did the spade work with a series of drives before Johnson timed his run off Hastings' shoulder to perfection as he darted in between the statuesque Malaghuradze and Mirian Modebadze for the touchdown.

Toolis was helped from the field after a painful collision with three Georgian forwards but the remaining Scotland players refused to relent.

Graham produced an expert finish down the line after Taylor injected some speed into the attack with a looped pass out wide while the Horne brothers completed the rout late on with a pair of opportunistic scores.