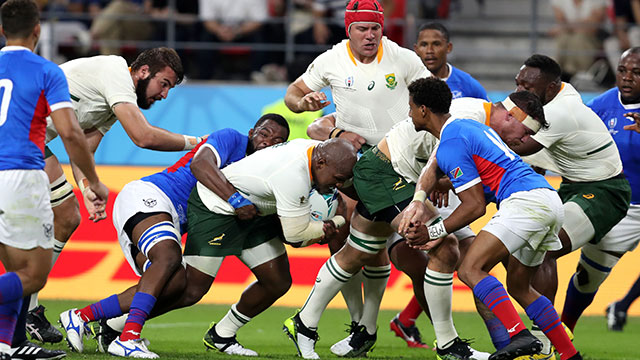 South Africa claimed their first win of the 2019 World Cup with a 57-3 thrashing of Namibia.

The Springboks had lost their opening Pool B fixture to New Zealand, but Rassie Erasmus' side predictably eased to victory in Toyota City by running in nine tries against their African neighbours.

Namibia, at 23 the lowest-ranked team at the World Cup, included university students, a brewery engineer and a qualified dentist in their part-time ranks and were placed under fierce pressure from the start.

South Africa dominated every facet of play and only some careless handling prevented a bigger margin of victory that might have had World Cup statisticians scrambling for the record books.

Namibia's try line survived until the 10th minute when hooker Mbongeni Mbonambi drove over, but Bath flanker Francois Louw immediately added another score and the writing was on the wall for the underdogs.

Mbonambi's second try from more explosive forward play and another conversion from Elton Jantjies made it 17 points in as many minutes.

Despite number eight Adriaan Booysen being sent to the sin bin for a deliberate knock on, there was some respite for Namibia as fly-half Cliven Loubser kicked a penalty.

But wing Makazole Mapimpi and centre Lukhanyo Am exploited further holes in the Namibia defence as the Springboks secured a bonus-point and a 31-3 half-time lead.

Loubsen struck an upright with a penalty attempt after the restart as Namibia enjoyed territory in the opening stage of the second half.

But South Africa showed their cutting edge as full-back Warrick Gelant combined with Am and sliced through.

Mapimpi exhibited his blistering pace again to round a couple of defenders and make it 10 tries in his first 10 Tests - matching the record of Springboks great Bryan Habana.

Replacement Siya Kolisi got in on the try-scoring act before Johan Coetzee became the second Namibian to be yellow carded for a shoulder charge on Schalk Brits.

The former Saracens hooker, who was playing at number eight, was soon back on his feet to power over from a maul and claim the Springboks' ninth try.

Jantjies added the extras for a 12-point haul and complete a comfortable victory for the two-time world champions.

But at least Namibia could take satisfaction from improving on their two previous meetings with South Africa, which they had lost 105-13 and 87-0.