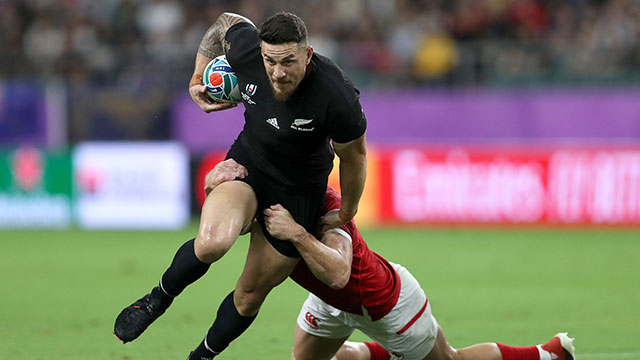 New Zealand delivered a masterclass as they demolished World Cup opponents Canada 63-0 in their second Pool B game in Oita.

The reigning world champions ran in eight tries and were awarded a penalty try against out-classed Canada, with the All Blacks' Barrett brothers, Beauden, Jordie and Scott, all touching down.

The All Blacks, bidding for a record third-straight World Cup crown, ground out a 23-13 victory over South Africa in their opening match but produced all their dazzling line-breaking skills against the Canadians, who had lost their opening game 48-7 to Italy.

New Zealand coach Steve Hansen made 11 changes with Beauden, Jordie and Scott Barrett becoming the first trio of brothers to appear for the country at a World Cup.

The Barretts also became only the second trio of brothers to start a World Cup match for any nation, following Tongan siblings Elisi, Manu and Fe'ao Vunipola in the 1995 clash with Scotland.

Centres Sonny Bill Williams and Jack Goodhue, wing Rieko Ioane and scrum-half TJ Perenara were among the other changes.

The All Blacks powered into a fifth-minute lead when they were awarded a penalty try after skipper Kieran Reid had picked up from a five-metre scrum.

Right-wing Jordie Barrett went over after catching Richie Mo'unga's pin-point cross-field kick and the reigning world champions led 21-0 after Williams burst through a tackle to score their third try from close range.

Scott Barrett let Canada off the hook when he dropped the ball while diving to touch down, but brother Beauden scored New Zealand's fourth try after racing onto Williams' neat kick ahead.

The All Blacks picked up where they left off in the second half, going over for their fifth try inside the first minute when Williams sent Ioane in at the corner and it was soon 42-0 after Scott Barrett charged over.

Flanker Shannon Frizzell was next to touch down as Hansen's side shifted through the gears.

New Zealand, for whom Beauden Barrett also dropped the ball when poised to score in the dying moments, maintained their record of never having lost a pool game at a World Cup, which now stretches to 30 matches.