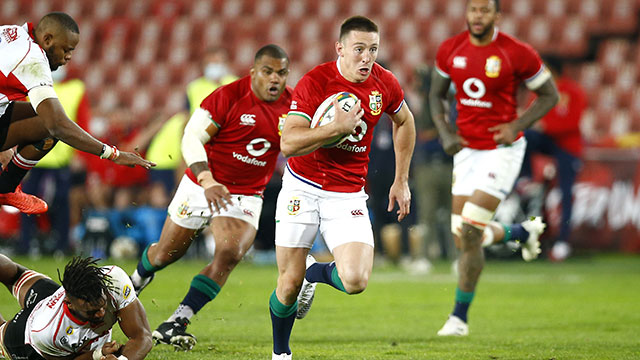 The British and Irish Lions have reacted to their second Test defeat to South Africa by making six changes including a revamped back three featuring Liam Williams and Josh Adams.

Stuart Hogg and Anthony Watson have made way for the Welsh duo whose aerial expertise will be essential to hopes of winning Saturday’s series decider at Cape Town Stadium, but in a surprise move, Duhan Van Der Merwe keeps his place.

Dan Biggar continues at fly-half but he is rejoined at half-back by Ali Price in a repeat of the partnership that started the first Test. Conor Murray drops to the bench.

Chris Harris is jettisoned at outside centre to make way for Bundee Aki’s promotion into the starting XV with Robbie Henshaw sliding to 13.

Warren Gatland has performed major surgery to his front row in expectation of a renewed set-piece assault from South Africa by bringing in prop Wyn Jones, who has recovered from a shoulder issue, and hooker Ken Owens.

The second and back rows remain unchanged, meaning Alun Wyn Jones continues as captain to make his 12th consecutive Test appearance for the Lions.

Gatland has also made three adjustments to the bench, where England captain Owen Farrell loses out to Finn Russell, who has recovered from an Achilles injury, while Adam Beard and Sam Simmonds are included for the first time in the series.

Kyle Sinckler is named among the replacements pending the outcome of Tuesday’s disciplinary hearing brought for biting in the second Test.

All the momentum is with South Africa after they emerged conclusive 27-9 winners from a fractious clash at Cape Town Stadium on Saturday, levelling the series at 1-1.

But Gatland said: “The matchday 23 have an incredibly special opportunity in front of them – to seal a Lions series victory in South Africa.

“It doesn’t get much bigger than this and we’re excited by the challenge that faces us on Saturday.

“We’ve no excuses from last week, the Springboks put us under pressure in the second half and deserved the win. We have to be much better than that second-half performance, and I believe we will be.”