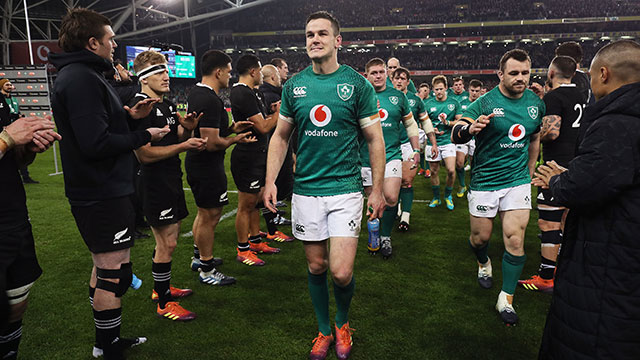 Johnny Sexton has been crowned World Rugby Player of the Year on a night of sweeping success for Ireland.

Joe Schmidt scooped the coach of the year award, with Ireland named team of the year in a triple win for the 2018 Six Nations Grand Slam winners at the World Rugby Awards.

The 33-year-old is just the second Irishman to land the gong, following in the footsteps of former Ireland hooker Keith Wood, in 2001.

"It's been an incredible year for Irish rugby, to win everything we could, really," Sexton told Press Association Sport.

"It's been very special, and a few of us have ended up here tonight.

"There are areas we've definitely highlighted to improve, which will be important in World Cup year.

"Teams try to peak for World Cup years. People ask have we peaked too soon? Well we haven't peaked, so we're just getting better and hopefully we can continue to do that.

"You have to improve ahead of the general curve. We know everyone else is going to get better.

"We'll be going into a lot of games now as favourites after what's happened this year, so that will be a challenge for us.

"We've got to deal with being favourites and I'm sure we can do that."

Sexton's stunning drop-goal on the 41st phase of the final play secured Ireland a 15-13 win over France in Paris, as Schmidt's men set the ball rolling on just their third-ever Grand Slam.

Kiwi boss Schmidt has guided Ireland from eighth to second in the world rankings in five years at the Test helm.

That rise has proved as measured as it has rapid, and has earned the taskmaster boss the coach of the year prize.

Australia's Angus Gardner picked up the Referee Award, with Doddie Weir scooping the Award for Character.

Jamie Armstrong of charity The Clan was handed the Spirit of Rugby Award, while Stephen Moore and DJ Forbes both picked up the IRP Special Merit Award.