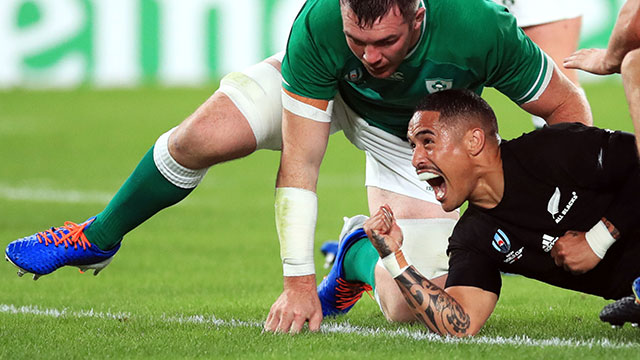 Beauden Barrett, Codie Taylor, Matt Todd, George Bridge and Jordie Barrett all bagged scores too as the relentless All Blacks booked a semi-final showdown with Eddie Jones' England in Yokohama on Saturday, October 26.

Back-to-back champions New Zealand have not tasted World Cup defeat for 4,397 days, since their 20-18 last-eight loss to France in 2007.

Now only two more victories stand between head coach Steven Hansen's men and a third global crown in a row.

Error-strewn Ireland were left to count the cost of a seventh quarter-final defeat in nine World Cup tournaments, a Robbie Henshaw score and a penalty try offered scant consolation.

And yet the one piece of history Schmidt most craved will forever remain tantalisingly out of reach. Ireland's wait for a first World Cup semi-final inches onto 32 years of frustration, and now there is nothing Schmidt can do about it.

Ireland were blown away 43-20 by Argentina in the 2015 Cardiff quarter-final, Schmidt's injury-ravaged men savaged by the merciless Pumas.

Four years on, Schmidt and Ireland had all their big guns on display, but no arsenal was enough to gun down the masterful All Blacks.

Ireland beat the All Blacks for the first time ever in Chicago in 2016, then again in Dublin in November. But Schmidt's men peaked a year too soon, sweeping the board last term with the 2018 Grand Slam and that home victory over New Zealand.

Henshaw's poor knock-on on first-phase ball off a lineout under minimal pressure set the tone for an error-ridden night for the Irish.

Sexton went for broke trying to punt a halfway line penalty to the corner, only for Mo'unga to leap acrobatically and tap the ball back into play.

New Zealand took another gift, gleefully racing back on the attack - with Sevu Reece drifting off his wing to ghost into acres of space in the outside centre channel.

George Bridge was hauled down just shy of the line, but again Smith wriggled home.

Ireland came again, but Sexton saw the ball dislodged cheaply attempting to shift onto Kearney. Mo'unga fly-hacked on, Beauden Barrett raced clear of all the cover - and dotted down the third score, just past the half-hour.

Ireland found time to grind into the All Blacks' 22 at the death of the half, desperately flailing to put points on the board.

But just when a first score of the match inched into sight, Peter O'Mahony hit a ruck shoulder-first, conceding a penalty and ending the half.

Nothing changed after the interval, New Zealand quickly onto the front foot and maximising that dominance.

Kieran Read's pop off the ground handed hooker Taylor a walk-in for the fourth try, and replacement Todd thundered home just past the hour after a fine crossfield kick set Reece on the run.

Ireland rallied once a raft of replacements had joined the fray, with Henshaw bagging a try, at the second attempt.

The Leinster star had knocked on moments earlier when attempting to dot down for a try, but redeemed himself slightly by powering over from a five-metre scrum.

New Zealand hit back without delay, Bridge crossing in a flash after Ardie Savea fed Dane Coles and the replacement hooker popped on to the young winger.

Ireland scored again with a penalty try when Todd was sin-binned for shoulder-charging the whitewash-bound CJ Stander.

Jordie Barrett grabbed the last word however, crossing in the right corner. New Zealand wrestled the last laugh at the last two World Cups, and could so easily do the same again in Japan.