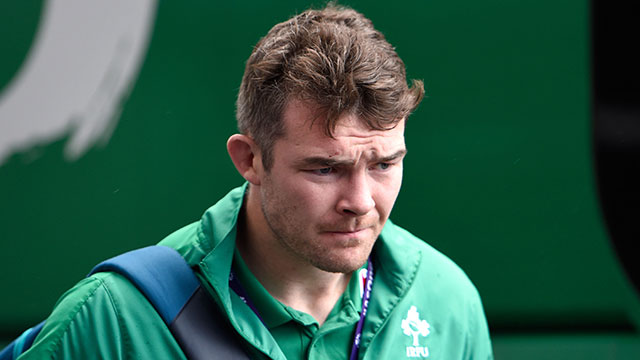 Munster's Niall Scannell starts at hooker with a big chance to seal his World Cup squad spot, with 37-year-old Ulster stalwart Best added to bench at his own request.

Best and prop Tadhg Furlong were due to be rested this weekend, but Schmidt admitted both asked for extra time to push themselves back up to top match sharpness.

Schmidt refused to give any guarantees that Best will captain Ireland at the World Cup on Tuesday, but has now defended his regular skipper in the wake of the eight-try England hiding.

"The people who maybe really launched the criticism at him, some of it is unfair," said Schmidt, of Best.

"The quality of what he provided, his support play and breakdown work, was still of a good standard.

"To put his performance in the nutshell of the lineout which is a lot of moving parts, there's a little bit of undue criticism.

"At the same time Rory is very self-critical. He is very conscious of wanting to improve himself.

"I know internally he sets an incredibly high benchmark for himself, he didn't reach that benchmark and he will be very keen to re-establish that benchmark coming off the bench on Saturday."

Asked if he had always planned to include Best and Furlong on the bench for the Principality Stadium clash, Schmidt said: "It wasn't originally the plan, but the plan is always fluid.

"You get guys who get knocks, or guys who need more time.

"They were very keen to get back in and get back involved, they felt they were just a bit off last week.

"They felt that it would help them in their preparation if they got a little bit more time this week.

"We're looking at them getting 25 to 30 minutes as the plan. That can springboard them into next week and beyond if they are selected.

"Rory felt he was underdone, and didn't have the energy in his legs."

Ireland's soul-searching this week has included boss Schmidt unusually addressing the media on Tuesday, while Jacob Stockdale has had his shaggy hair cut short and Bundee Aki his bushy beard shaved off.

Peter O'Mahony will captain Ireland on Saturday from openside flanker - the Munster star shifting across the back-row to accommodate provincial colleague Tadhg Beirne at blindside.

O'Mahony, Aki and Stockdale are Ireland's sole survivors from last weekend's Twickenham humbling, as Schmidt looks to hand out chances far and wide in his squad.

Jack Carty starts at fly-half with a big opportunity to push ahead of Ross Byrne in the queue for Ireland's third playmaking berth.

Ulster's Will Addison will make his first start at full-back, with the former England Under-20s star's versatility leaving him still in the frame to squeeze into Ireland's final 31-man World Cup squad.

Ireland have not named a recognised fly-half on their bench, with replacement centre Garry Ringrose and Addison both covering that role.

"For Will, it's a really important opportunity but he has to hit the ground running," said Schmidt of Addison.

"He's trained really well this week, so we're hoping he can hit the ground running.

"He's a very capable kicker of the ball, including goal-kicking, and the jack of all trades that we very well might need.

"As far as out-half cover we've got a couple of guys: Will is one of them and Garry Ringrose is the other.

"Garry has played a bit of out-half at school level. He has the temperament and skill base to fit in there."