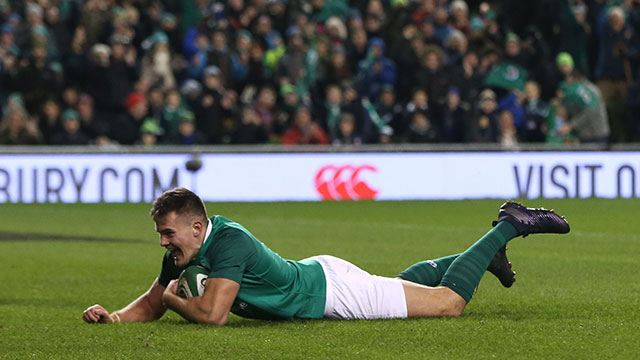 The 21-year-old Stockdale now has four tries in four Tests, and is firmly en route to realising his rich potential.

The 6ft 3in wing's tries here topped a performance as industrious as it was effective: in the Wallace High School alumnus, Ireland now boast a genuine Test star.

Joaquin Tuculet, Juan Manuel Leguizamon and Ramiro Moyano's tries proved scant consolation for a frustrated Argentina, against whom Ireland claimed some vengeance for the Pumas' 43-20 World Cup quarter-final victory in 2015.

Agustin Creevy held back the tears before kick-off during a minute's silence for the 44-strong crew of submarine ARA San Juan, lost at sea since November 17. The Pumas captain held aloft a shirt bearing the number 44 in tribute to the crew, for whom fears continue to grow amid extensive sea searches.

Creevy conceded a cheap penalty to gift Ireland the lead once the action got under way however, in from the side at a ruck, allowing Johnny Sexton to slot the opening penalty.

Sexton doubled Ireland's lead from the tee when the hosts bulldozed the much-vaunted Pumas scrum, with Cian Healy receiving the back-slapping plaudits from team-mates.

Nicolas Sanchez fluffed a long-range penalty shot for the visitors, but then Ireland struck.

Chris Farrell's lovely soft hands for Sexton on the loop shredded the Pumas line, and the fly-half ghosted on before sending Stockdale under the posts.

The conversion had Ireland 13-0 up on the 20-minute mark, and so the scores stayed until the break - in no little part down to Ireland rebuffing an 18-phase attack from Argentina.

Daniel Hourcade's men missed a staggering 19 tackles in a patchy first half, and hardly fared any better after the turnaround.

Stockdale provided the perfect second-half opening, cutting a tight line off Sexton before rounding the cover to score in the corner.

Finally Argentina rallied, with Sanchez's cute dinked grubber turning Ireland's defence for Tuculet to score. Sanchez slotted the conversion to drag the visitors back, tentatively at least, into the contest, albeit despite Ireland's 20-7 advantage.

An injury to Farrell forced Ireland into a backline rejig on the hour, with Adam Byrne perhaps a surprise to tuck in at centre as opposed to Stockdale.

The Pumas lost their temper at the try, with Tadhg Furlong standing firm in the midst of a scuffle.

Sexton struck the right-hand post with his conversion attempt, leaving Ireland 25-7 to the good.

Veteran flanker Leguizamon rolled back the years with a winger's finish for Argentina's second try, before Sexton slotted his third penalty of the night.

Moyano nabbed a third score for the Pumas after a stunning field-length break initiated by Sebastian Cancelliere, but the game had already gone.