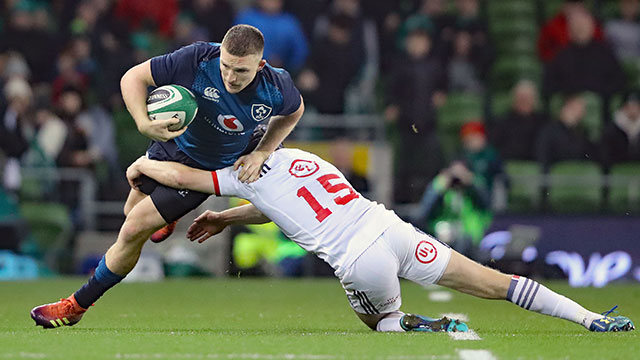 Munster wing Conway stole the show in an enterprising display as a much-changed Ireland extended their record home winning run to 12 matches.

Ireland made 14 changes from last weekend's stunning 16-9 win over New Zealand, but still negotiated a stress-free victory, to add to the triumphs over Italy and Argentina this month.

Iain Henderson was sin-binned in the first-half as the USA claimed a penalty try, while Worcester hooker Joe Taufete'e also crossed for a try but was later knocked out and withdrawn prematurely.

The host's main frustration on the night would perhaps prove an early injury to Darren Sweetnam that forced a backline reshuffle and denied Joey Carbery the chance to run the bulk of the game at fly-half.

The Munster playmaker had to shift out to full-back, with Ross Byrne stepping off the bench at 10. Byrne showed up well, but head coach Schmidt still needs Carbery to close the gap with stellar fly-half Johnny Sexton and the injury re-jig denied Ireland's second-choice 10 an extended stint manning the team's tiller.

Rhys Ruddock conjured a captain's line-break straight from the off, before sending Conway across the line for the opening score.

Carbery's conversion had Ireland eyeing a rout, but suddenly the USA stirred.

Fly-half Will Magie missed a penalty shot, but the Eagles maintained camp in Ireland's half.

Worcester hooker Taufete'e sneaked away on a smart front peel, and when Ireland failed to complete the tackle he leapt to his feet and slid home.

Magie's conversion had the visitors level, and Ireland fuming.

Ringrose's fine break set Ireland back on the front foot, and then Conway trotted in for a facile second.

Indiscipline undid Ireland though, with Henderson sent to the sin bin for sacking a tryline-bound USA maul.

The penalty try had the Eagles back in the fight at 14-14 and Ireland down a man for 10 minutes.

The hosts not only rode out that disparity without conceding though, Carbery posted a penalty and then Conan raced over after another Conway break.

Ireland carried a 24-14 lead into half-time then, before Taufete'e was knocked clean out attempting to tackle Henderson on the teams' return.

The hosts exploited their clear scrum dominance for Beirne to punch over, before replacement lock Roux got in on the try-scoring act from close-range.

Ringrose conjured a scything break late on to tear the USA to shreds in midfield, jinking deep into the 22 before standing up the cover - and sending Conway home for his deserved hat-trick score.

Prop John Ryan powered home for Ireland's eighth try at the death, with Carbery converting for a personal 17-point haul.