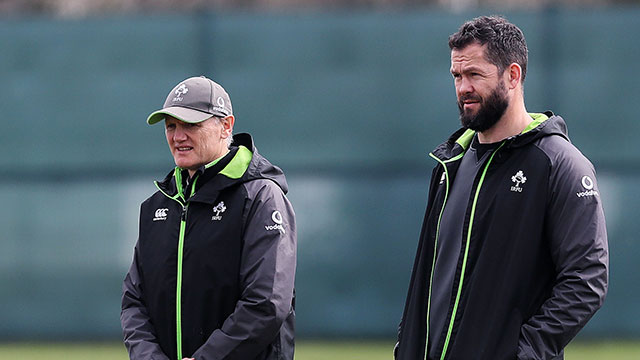 Joe Schmidt has announced he will retire from coaching after the 2019 World Cup and Andy Farrell will succeed him as Ireland boss.

New Zealander Schmidt had been regarded as a future All Blacks coach, but he has announced that he will finish coaching following next autumn's tournament in Japan.

"I have decided to finish coaching and will prioritise family commitments after the Rugby World Cup in 2019," Schmidt told the official Irish Rugby Football Union website.

"I feel that Irish rugby is in good hands. The management and players have been incredible to work with and the tremendous support we have had, particularly at home in the Aviva, but wherever we have travelled, has been uplifting."

Schmidt, 53, was appointed in 2013 after three years in charge of Leinster and has overseen the most successful period in Ireland's history.

Ireland have won three Six Nations titles under Schmidt, including a Grand Slam in 2018, and risen to the number two spot in the world rankings.

They have beaten all three southern hemisphere super-powers with a first win on South African soil in 2016 and a series win in Australia in 2018.

Ireland recorded a first win over world champions New Zealand in Chicago in 2016, a triumph which they repeated in Dublin nine days ago.

"Thank you to the IRFU for their support and patience and thanks also to so many people who have adopted my family and me, making us feel part of the community here in Ireland," said Schmidt, who was named 2018 world rugby coach of the year on Sunday.

"There are some inspiring challenges over the next 11 months so there's plenty of motivation for me to continue working hard, alongside the other management staff, so that the team can be as competitive as possible."

Farrell, who was capped as a player by England in both union and league codes, is considered one of the best defence coaches in world rugby.

The 43-year-old joined Ireland in 2016 after spells with England and English Premiership side Saracens, and was part of the coaching set-up on the last two British and Irish Lions tours under Warren Gatland.

"It is a privilege to be considered for such a prestigious role," Farrell said.

"I have learned a lot from Joe over the past few seasons and I will continue to learn from him over the next year as the coaching group and players focus on competing in two huge tournaments in 2019."

"As part of Joe's management, team Andy has already helped to deliver huge performances and I know he will continue to inspire our players for years to come.

"Andy has world class coaching credentials and we are pleased to have a road map for an orderly transition post-Rugby World Cup to the 2019 Six Nations."

On Schmidt's impact on Irish rugby, Browne added: "I would like to thank Joe, and his family, on behalf of the IRFU Union committee, all the staff of Irish Rugby and every rugby supporter, for everything he has done for the game in Ireland.

"Sport has the ability to lift people out of the day-to-day concerns of life and Joe, and his team, have provided historic moments of great joy, that will live long in the memories of everyone in the rugby family.

"Of course, this is not yet the end, and we look forward an exciting and challenging 11 months for Irish Rugby during Joe's final Six Nations and the Rugby World Cup in Japan.

"On a personal level, I would like to thank Joe for his warmth, his time, honesty and his genuine interest in everything that we do in Irish Rugby to grow the game."