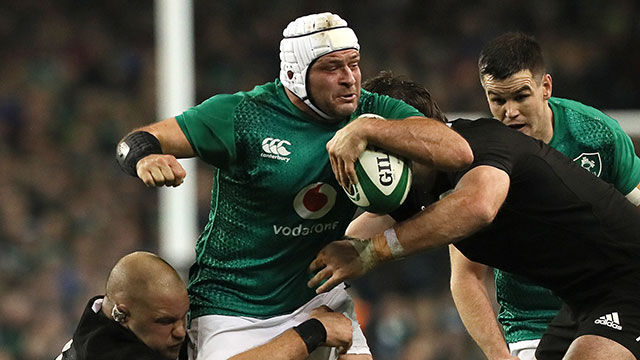 Ireland captain Rory Best has admitted he expects to retire after the 2019 Rugby World Cup.

Best will win his 116th cap in Sunday's Six Nations clash against France in Dublin, but now intends to bring down the curtain on an international career dating back to 2005 before this calendar year is out.

The evergreen 36-year-old now hopes his Test swansong could be leading Ireland to a first-ever World Cup semi-final, and maybe even beyond, come the autumn tournament in Japan.

Best will captain Ireland for the 31st time at the Aviva Stadium on Sunday in what should now become his last home match in the Six Nations.

"I think it's fairly certain that the World Cup will be the end for me," said Best.

"I think that I feel really good, I don't feel I'm playing any worse. I'm really enjoying rugby and part of that might be because I haven't 100 per cent made the decision.

"But I'm fairly sure it will be, and part of the reason I'm enjoying rugby so much - and I hope playing well - is because there's that weight lifted off.

"When you're playing, you start to get fixated with what's coming, or if you're playing well in this Six Nations you put yourself in the window for the World Cup.

"And if you play well in the World Cup there's two more Six Nations and you're in the window to the Lions tour.

"And you start to get bogged down with things that don't really matter."

Ulster and British and Irish Lions hooker Best sits third on Ireland's all-time appearance list, behind Ronan O'Gara with 128 caps and and Brian O'Driscoll with 133.

The uncompromising front-rower spent the first half of his Test career battling with Munster's Jerry Flannery for the number two shirt.

But as time passed Best forced his claims and eventually overtook the decorated Flannery, and the Ulsterman then moved on to be named captain in 2016.

Best has led Ireland to their maiden two victories over New Zealand and to the 2018 Six Nations Grand Slam, just the nation's third clean sweep in history.

With head coach Joe Schmidt also stepping down after the World Cup, the Ireland set-up will be all change come 2020.

"I'm feeling very relaxed now that the body feels that it's happy to go on," said Best. "And at the minute, mentally I'm really enjoying the rugby.

"But I'm in a really lucky position at the minute that the way I'm feeling, I can go to the World Cup and be at the top of my game.

"And for me, the way I'm thinking at the minute, that will be a really good time for me.

"Plus, Joe (Schmidt) said he didn't want me to keep going without him!"

Best will make his 64th Six Nations appearance against the French, and admitted it is starting to sink in that this will be his final turn in the tournament in Dublin.

"I suppose in the early part of my career, I thought that every home game was going to be my last home Six Nations game," joked Best.

"It has been in the back of my mind that this will be my last home Six Nations game.

"I hope that my last game for Ireland isn't going to be until the very start of November.

"Now that we're upon this, the captain's run, it just reminded me how special this championship has been, for me personally, but also to be able to do captain's runs, play out there, pull on that jersey in the Six Nations.

"It's been incredibly special for me and it's very hard to believe that in just over 24 hours, you'll potentially not get that opportunity again to play in a Six Nations here.

"It's a little bit sad but you also have to understand how incredibly lucky and special it's been and how lucky I've been to play for Ireland in so many Six Nations games."