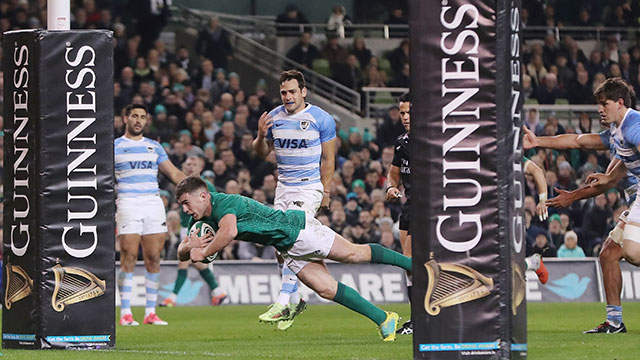 Ireland laboured to a patchy 28-17 victory over Argentina in Dublin, losing Sean O'Brien and Kieran Marmion to serious-looking injuries.

Marmion, Bundee Aki and Luke McGrath scored Ireland's tries as the Six Nations champions started their November campaign-proper with a staccato win over the stubborn Pumas.

Wing Bautista Delguy crossed for Argentina, who edged ahead in the second-half through Nicolas Sanchez's third penalty, before Ireland battled back as Johnny Sexton finished with 13 points.

Joe Schmidt's men lost flanker O'Brien to an arm injury and scrum-half Marmion to a leg concern, though - and that after Robbie Henshaw had pulled up in the warm-up with a minor hamstring complaint.

Ireland could now be without British and Irish Lions Test star O'Brien and Marmion for next weekend's eagerly-anticipated Dublin clash with back-to-back world champions New Zealand.

The luckless O'Brien was starting his first Test in almost a year following shoulder and knee trouble, but now looks set for another stint on the sidelines.

Dan Leavy came off the bench against the Pumas, and would likely battle it out with Josh van der Flier to face the All Blacks if O'Brien misses out.

Connacht scrum-half Marmion may now join Conor Murray on the treatment table, with the Munster and Lions star still likely to miss the rest of the autumn after long-term neck trouble.

Luke McGrath and John Cooney would be left at nine to take on New Zealand should Marmion fail to recover.

Head coach Schmidt will hope Henshaw's hamstring niggle is minor enough to have the Leinster star fit to face the All Blacks.

Henshaw and Garry Ringrose - expected to be fit after a bang to the hip - should be Ireland's preferred centre pairing for New Zealand's Aviva Stadium visit.

Ireland's haste and expectations almost got the better of them from the off against the Pumas.

Sanchez's shot at goal put Argentina in the early lead, before the hosts punted three penalties - two eminently kickable - to the corner.

Just when Ireland looked to be leaving their opponents' 22 empty-handed, up popped Marmion to nip home after a potent scrum.

Sexton missed the conversion, before Sanchez slotted a second penalty after sloppy Irish work in losing the restart.

The forwards traded stony faces and blank expressions - then powered Argentina off their own scrum ball to set up a try.

Aki scythed through traffic to storm home, as Ireland continued to chase control.

Sexton traded penalties with Sanchez for Ireland to carry an edgy 15-14 lead into the break.

Sanchez booted his third penalty to push the Pumas into a 17-15 advantage to start the second half.

Sexton's 50-metre shot at goal then fell just shy, but the Leinster star made no mistake with his next effort.

Ireland edged back in front 18-17 approaching the hour, but had to face the final quarter without Marmion.