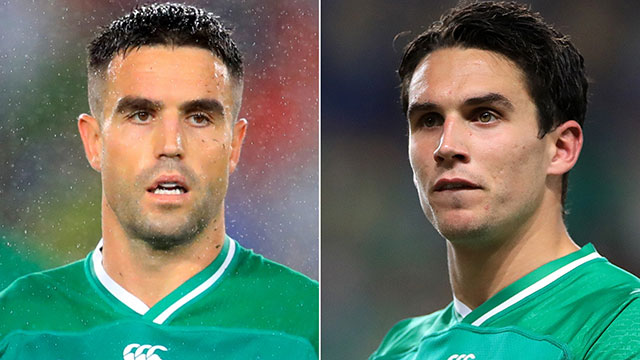 Conor Murray and Joey Carbery have been selected as Ireland’s half-back pairing for Sunday’s autumn series finale against Argentina in Dublin.

Ulster wing Robert Baloucoune and Leinster centre Robbie Henshaw have also been recalled by Andy Farrell, with Andrew Conway and Bundee Aki dropping out of the squad.

Scrum-half Murray, who toured with the British and Irish Lions during the summer, will make his first Ireland start since March, while Carbery has been rewarded for his match-winning cameo against the All Blacks.

The provincial team-mates have only once before been paired together from the off at Test level, an 18-9 loss during the 2018 tour of Australia.

Lock James Ryan will captain his country for the fifth time after the influential Sexton was ruled out for up to six weeks having twisted a knee and ankle against the Kiwis.

Meanwhile, Henshaw returns from a foot injury for his first outing of the season, partnering Garry Ringrose in midfield.

Baloucoune – who made a try-scoring debut against the United States in July – will line up on the right flank, with James Lowe and Hugo Keenan retained at left wing and full-back respectively.

Head coach Farrell, whose side are seeking an eighth successive win, has resisted changes to his forwards, with lock Iain Henderson once again the only non-Leinster player selected from the off.

Ulster captain Henderson will pack down alongside stand-in skipper Ryan in the second row, behind Andrew Porter, Ronan Kelleher and Tadhg Furlong, with Jack Conan between Caelan Doris and Josh Van Der Flier in the back row.