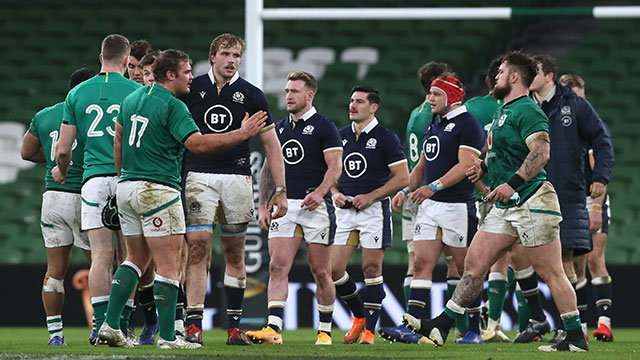 Ireland and Scotland have been drawn together alongside world champions South Africa for the pool stage of the 2023 Rugby World Cup in France.

Andy Farrell’s side and Gregor Townsend’s men will join the Springboks, an Asia/Pacific qualifier and a qualifier from Europe in Pool B.

England have been drawn alongside Japan and Argentina in Pool D, while Wales will be joined in Pool C by Australia and Fiji.

Hosts France have been paired with three-time world champions New Zealand in Pool A, a group which also includes Italy.

The 10th edition of the tournament will take place from September 8 to October 21, 2023 at nine venues across France.

Eddie Jones’ England, beaten finalists last year in Japan, will also be joined in their group by qualifiers from Oceania and the Americas.

The coronavirus pandemic’s impact on international rugby this year meant teams were seeded based on World Rugby’s official rankings 11 months ago as some nations, including South Africa and Japan, have not played in 2020.

Wales, who have dropped from fourth to ninth in the rankings this year, were one of the countries to benefit as they were included among the top seeds.

The Welsh defeated both Australia and Fiji in the World Cup pool stage last year en route to reaching the semi-finals.

Wayne Pivac’s men will also play two yet-to-be-determined qualifiers, one of which will be from Europe.

France will host the tournament for the second time, having also done so in 2007 when South Africa defeated defending champions England 15-6 in the final.

The French have been revitalised under new head coach Fabien Galthie and have been moving at a rapid rate towards being major contenders in three years.

In addition to facing an All Blacks team which has never lost a World Cup pool match – winning each of their 31 previous fixtures – they will also play Six Nations rivals Italy, plus qualifiers from the Americas and Africa.

England captain Owen Farrell views advancing into the knockout phase of the 2023 Rugby World Cup as a major challenge after the Six Nations champions were drawn alongside Argentina and Japan in Pool D.

“It’s a great pool to be a part of. If you look across them all, they’re all tough, tough pools,” Farrell said.

“With the way that Japan and Argentina are going at the minute, some of the rugby that has been played over the last few years by them both, obviously it’s going to be a tough pool.”

This is the third successive World Cup in which Wales have found themselves in the same pool as Australia and Fiji.

“I certainly have an affinity to Fiji, having coached there in 2007, and with Dave (Rennie) at Australia, it’s going to be a big challenge.

“It does give us a real focal point now, and everyone is going to be on their toes for every single match.”