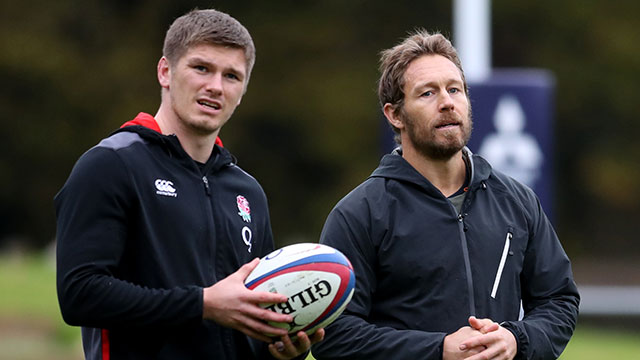 World Cup-winner Wilkinson hailed boss Eddie Jones for taking his players "to the edge" in the same way as Sir Clive Woodward in the build-up to that 2003 triumph.

The former England fly-half believes the class of 2019 boasts a backline full of rare-breed talents that can strike fear into opponents in Japan.

England will launch their World Cup bid against Tonga on September 22, with former Newcastle and Toulon fly-half Wilkinson backing Jones' men to peak at the right time.

"The momentum is rolling, they are peaking," Wilkinson told the PA news agency. "I'd definitely like to think they can win it.

"What's impressed me most is that every time they get a chance to regroup they always come back stronger.

"That doesn't mean it always goes perfectly. But every time they regroup the next performance is huge, and they are very good at building momentum.

"They're constantly coming back bigger and stronger, and reinventing themselves, and for me, that's the key.

"And teams will have to do that in this World Cup, it won't just be a straight run of wins.

Wilkinson has spent time in the England camp as an occasional skills coach, and believes Jones' abrasive edge pushes players to reach their full potential.

"The key for a coach is setting the environment for the players," said Wilkinson, speaking as a Land Rover ambassador.

"That involves clarity but also that everyone is important, whether that's a junior coming in for a few sessions, or the captain.

"They need to feel that there's a guy constantly challenging them to let it go, challenging you to go to the edge where you don't know what's on the other side and to step into that space.

"We had that in 2003. And we had a beautiful environment where guys were motivated and encouraged to explore, and not to play it safe.

"There's nothing better than someone there who's actually willing to give you a living example of saying 'you know what, I can deal with all consequences'. That allows you to go out there and give it all you've got."

Wilkinson believes England's blend could even be the envy of the likes of back-to-back world champions New Zealand.

"The way the game is now that second decision-maker can't just be a second fly-half, he has to have enough about him to be able to move in contact, to offload, to be a physical threat, not just another decision-maker and ball player," said Wilkinson.

"So guys like Farrell and Slade, they are quite rare breeds, to be big enough and strong enough but also to be able to take a step back and direct things too.

"That rare breed really opens up some options. And outside that there's another rare breed in Manu Tuilagi, who if you leave him half an arm you've got no chance.

"So it's a lovely balance to have. And one we might have looked at New Zealand or other teams in the past and thought 'wouldn't it be lovely to have that', and now we do.

"Outside that too we've got Jonny May and Joe Cokanasiga, who are not just finishers they are get-out options too, they are power runners, and in some cases extra forwards too.

"With the decision-makers and the threat of Tuilagi, it's a big threat, and provided they all stay fit, then why not? It could be a great World Cup."

:: Land Rover is an official worldwide partner of Rugby World Cup 2019. With more than 20 years of heritage supporting rugby at all levels, Land Rover is celebrating what makes rugby rugby. #LandRoverRugby