Heartache for England as South Africa ease to final success 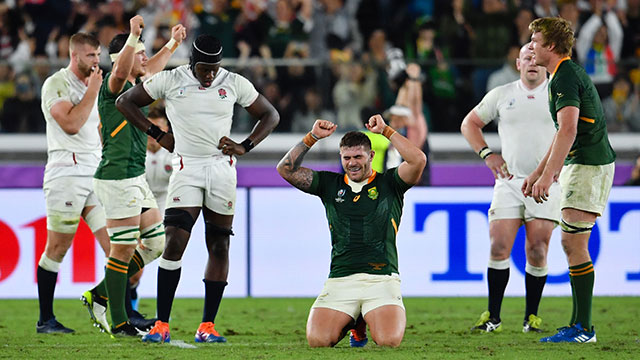 England were stunned by South Africa's relentless intensity as their World Cup quest ended with a crushing 32-12 defeat in the final at International Stadium Yokohama.

A tense arm wrestle delivered its critical moment in the 66th minute when Makazole Mapimpi and Lukhanyo Am combined brilliantly down the left wing for the first of the Springboks' two tries.

England's defence was unlocked by the speed and accuracy of a move that saw Mapimpi cross to become the first Springbok to score a try in a World Cup final, although there was also a hint of a forward pass.

And with Eddie Jones' men forcing their attack in desperate pursuit of an unlikely comeback win, wing Cheslin Kolbe switched on the afterburners to deliver the knockout punch with six minutes remaining.

The victory maintains South Africa's 100 per cent record in finals and enables Siya Kolisi's team to join the famed Springboks of 1995 and 2007.

After flying out of the blocks against New Zealand a week earlier, England were ambushed by South Africa's instant ferocity and never truly recovered.

Seeing prop Kyle Sinckler knocked out inside three minutes and unable to return was a savage setback - but it was only the beginning of their problems as panic swept through Red Rose ranks.

Nowhere was the vulnerability more evident than at the scrum where Tendai Mtawarira tormented Sinckler's replacement Dan Cole to win a series of penalties that placed South Africa in full command.

In recognition of the set-piece decimation, George Kruis was summoned into the second row to add ballast and while that made no difference, the arrival of Joe Marler brought a form of parity.

The damage had been done, however, and despite the valiant efforts of the Vunipola brothers, Tom Curry, Sam Underhill and Maro Itoje, England eventually fell apart as the heroics on display against the All Blacks became a distant memory.

South Africa had a laser-guided kicker in Handre Pollard to capitalise fully on the set-piece control, while Owen Farrell landed four penalties for the pre-match favourites, who have now lost in the final on three occasions.

'Swing Low' reverberated around a stadium turned white by noisy England fans, who were quickly stunned into silence when Sinckler was knocked out during a collision with Itoje and Mapimpi.

The prop received medical attention for several minutes before departing the pitch on unsteady feet and on the next scrum, with Cole now at tighthead, South Africa produced a mighty shove.

Willie Le Roux glided into space and Pollard forced a gap as the Springboks poured forward and when a penalty came at the breakdown, Pollard drew first blood.

Ben Youngs joined Farrell and Billy Vunipola in flinging out a wild, misjudged pass as England continued to invite pressure but they sprung into life with their first visit to the opposition 22 with the Vunipola brothers making thunderous carries.

The passage of play was ended by three points from Farrell but it also delivered a blow to South Africa, who lost hooker Mbongeni Mbonambi and lock Lood De Jager to injury.

Another scrum penalty allowed Pollard to regain the lead and when Ford kicked out on the full, things were looking bleak.

But England rose again with a sustained onslaught lasting 26 phases, one more led by the Vunipolas but with assistance from Manu Tuilagi, and they were only kept at bay by desperate defending before collecting another three points through Farrell.

South Africa continued to squeeze and smother, especially at the scrum, and when Pollard was on target with two additional penalties they led 12-6 at half-time.

No team has won a World Cup having trailed a final at half-time and that statistic looked safe as England's set-piece continued to hurtle backwards, resulting in Pollard landing from the kicking tee for the fifth time.

With Joe Marler's arrival fortunes changed and referee Jerome Garces reacted as South Africa were sent into full retreat, Farrell making the most of the opportunity by nailing his kick.

An exchange of penalties followed but suddenly the Springboks no longer needed the boot of their hard-running fly-half as first Mapimpi and then Kolbe plundered superb tries.

Both took advantage of tiring English legs, stamina sapped by the sustained battering they had taken at the hands of worthy winners.