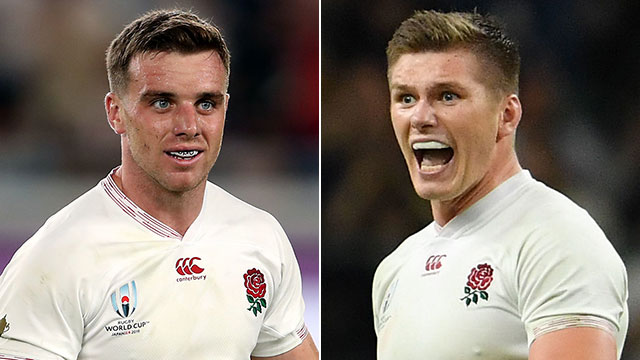 England will entrust twin playmakers George Ford and Owen Farrell with the task of masterminding victory over South Africa after naming an unchanged side for the World Cup final.

Eddie Jones has kept faith with Ford at fly-half after his outstanding display in the remarkable 19-7 last-four victory over New Zealand - despite the physical threat posed by Springboks centre Damien de Allende.

The in-form Ford was dropped against Australia two rounds ago to stiffen the midfield defence in the hope of containing the Wallabies' Samu Kerevi, but his vision is viewed as essential to toppling South Africa at International Stadium Yokohama.

Farrell and Manu Tuilagi continue their centre partnership and there is a boost for England in the front row after Kyle Sinckler won his battle with a calf injury to resume at tighthead prop.

There is one injury-enforced change on the bench where Ben Spencer comes in for Willi Heinz, who has been ruled out of Jones' 50th Test as head coach because of a hamstring injury.

Spencer will win his fourth cap and make his World Cup debut if he is brought on to replace scrum-half Ben Youngs.

It is the first time since March 2016 and only the second occasion overall that Jones has named an unchanged starting XV.

Farrell leads a side that contains 731 caps as England play in their fourth final and bid to lift the Webb Ellis Trophy for the second time.

"It has been a good week, the players have been together a while now so it's less about the volume of training this week, it's more about sharpening the sword," Jones said.

"South Africa are a difficult opponent and we are going to have to fight really hard to win.

"We know the physical part of the game is going to be important and the players will go into this game well prepared knowing how we want to play. We will go and play with no fear.

"South Africa will probably play a similar type of game to what they have played all tournament so we need be good in the arm wrestle so that when we have the opportunities to break the game up, we are then confident and composed enough to take them."