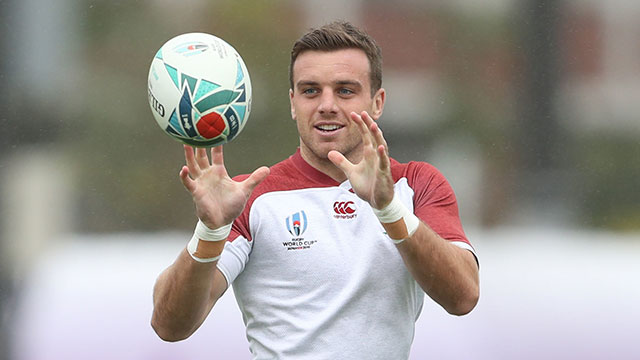 George Ford has been restored at fly-half for England's World Cup semi-final against New Zealand at International Stadium Yokohama on Saturday.

Ford was named on the bench for the last-eight rout of Australia but will now act as playmaker in chief for the biggest match of the Eddie Jones era.

Henry Slade must settle for a place on the bench to accommodate Ford with Owen Farrell and Manu Tuilagi forming the centre combination.

Jones sprang a major surprise by dropping Ford against the Wallabies but the decision was vindicated by a four-try demolition that resulted in the departure of coach Michael Cheika.

The Leicester fly-half was in superb form until his demotion to the bench and Jones has reverted to the twin playmaker option that has otherwise served him well during the World Cup and its build-up.

It is the only change to the starting XV with George Kruis unable to dislodge Courtney Lawes from the second row.

Jonny May has recovered from the hamstring problem sustained against Australia to continue on the left wing, but Jack Nowell has been unable to shake off the same injury and so misses out.

An additional change to the bench sees Mark Wilson given the opportunity to add to his solitary World Cup appearance against the USA after dislodging Lewis Ludlam.

Saracens number eight Billy Vunipola will win his 50th cap as part of a back row that includes Tom Curry and Sam Underhill.

Jones insists England will not be over-awed by the magnitude of the occasion as they seek to inflict a first World Cup defeat on New Zealand for 12 years.

"Preparation has been good this week after a solid win against Australia," Jones said.

"When you get to this stage of the World Cup it is all about focusing on being in the moment and getting yourself physically right.

"The squad has approached the game well with real maturity. It has helped having players here who have been on the Lions tour and played against New Zealand.

"They have been involved in some of the biggest games in world rugby so this semi-final won't faze them.

"New Zealand are a great team and they have an impressive winning record since the last World Cup.

"Like any good team, you have to take away time and space from them and you have to find areas you can pressure them. We believe we have identified a number of areas where we can do that."