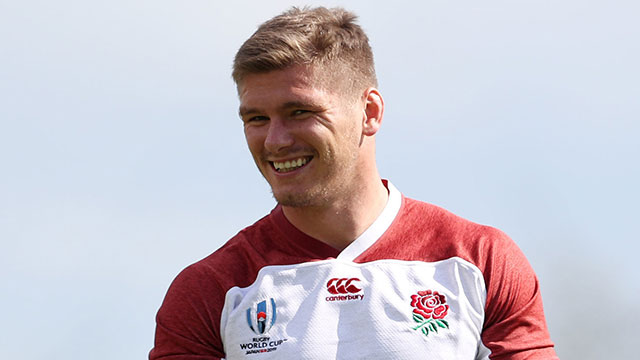 England have sprung a major surprise for Saturday's World Cup quarter-final against Australia by dropping George Ford and naming Owen Farrell at fly-half.

Ford has been superb as playmaker-in-chief since his restoration at 10 during the warm-up series for Japan and started all three group games in the position, but he is confined to a bench role for the Oita Stadium showdown.

Instead, Farrell will pull the strings as coach Eddie Jones reverts to his first choice midfield from the Six Nations, in which England's captain played inside centres Henry Slade and Manu Tuilagi.

The decision has shades of the World Cup four years ago when Ford was dropped for the pivotal group game against Wales in favour of Farrell, who on that occasion formed a heavyweight trio alongside Sam Burgess and Brad Barrett.

Jones has made three changes in personnel and two positional switches in pursuit of a semi-final against either New Zealand or Ireland.

Mako Vunipola is restored at loosehead prop after successfully making his latest comeback from a hamstring injury against Argentina, England's last outing after their Pool C finale against France was cancelled due to Typhoon Hagibis.

Vunipola's return means Joe Marler drops down to the bench where he joins second row George Kruis, who has lost his place in the starting XV to Courtney Lawes.

The two positional switches are Farrell's shift to fly-half and Tuilagi's move from outside to inside centre.

"Australia are a clever team, they will have some specific attacking strategies to play against us so we need to have a great situational awareness," Jones said.

"We need to defend with brutality and when we have the ball we need to play on top of them."

Billy Vunipola has recovered from the ankle injury sustained against Argentina nearly two weeks ago after proving his fitness in training on Wednesday, enabling him to continue at number eight.

Jonny May, who averages a try every two games, wins his 50th cap on the left wing six years after making his debut against Argentina.

"It's a great achievement and an honour for Jonny and his family. Everyone in the team is really pleased for him," Jones said.

"I think this World Cup has really shown how hard he has worked at his game. He has come back from a significant knee injury to be close to the fastest winger, if not the fastest winger in the world, and has the ability to score tries from any situation."

England enter the last eight clash as odds-on favourites to advance further in the tournament. They boast six successive victories against the Wallabies under Jones.

Their last defeat came in the World Cup four years ago when a comprehensive loss at Twickenham knocked them out of the competition they were hosting.