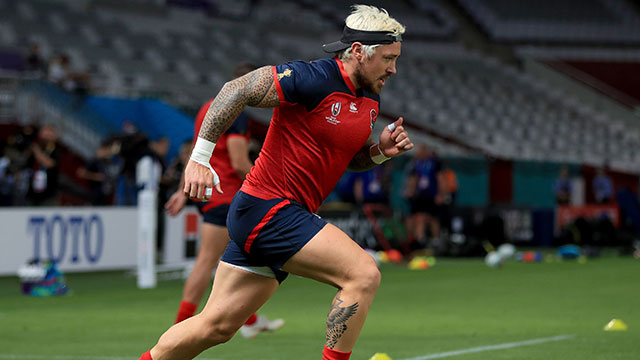 Jack Nowell has been passed fit for the match against Argentina (Image: Adam Davy/PA)

England will enter their crucial World Cup clash with Argentina boosted by the return of Mako Vunipola and Jack Nowell from the bench.

Vunipola and Nowell missed the Pool C victories over Tonga and USA because of respective hamstring and ankle injuries but have been passed fit for the first major test of the group phase.

The starting XV shows only one change to the side that secured a bonus point in the Sapporo opener with George Kruis replacing Courtney Lawes in the second row.

Kruis is England's best line-out technician and he partners Saracens team-mate Maro Itoje at lock with Lawes dropping to the bench to supply engine room cover.

Vunipola has played just 17 minutes of rugby since May 11 after his comeback against Ireland during the warm-up Tests was aborted when he damaged the scar tissue on his hamstring.

Joe Marler continues at prop with Vunipola, the sport's foremost loosehead, set to make his return as a second-half replacement at Tokyo Stadium.

Nowell has not played since his blockbusting performance for Exeter in last season's Gallagher Premiership final but is present on the bench where he will be unleashed as a hard-running impact substitute.

After the pool's two weakest teams were swatted aside, Eddie Jones has picked his strongest available side with playmakers George Ford and Owen Farrell fielded in tandem inside Manu Tuilagi.

Tuilagi was a marauding presence against Tonga, scoring two tries in a player of the match performance, but was rested for the USA clash.

Jones has opted for the openside flanker combination of Tom Curry and Sam Underhill, the duo he dubbed 'Kamikaze Kids', in the back row with Lewis Ludlam deputising on the bench.

England are guaranteed passage into the quarter-final if they topple Argentina seven days before they lock horns with Six Nations rivals France.

"Argentina is a completely different team from others we have played so far in the pool stages and are always about the physical contest," Jones said.

"This week it's about getting our game right, our set piece in a good place and making sure defensively we are organised and ready to find ways to score points against them."