England sweep aside Australia to end autumn series on a high 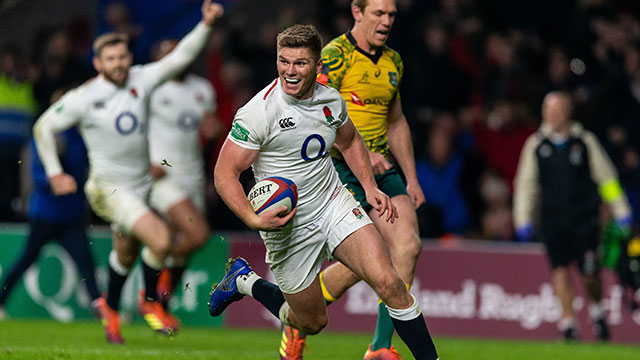 England swept aside Australia 37-18 to claim a sixth successive victory over the Wallabies and complete a successful autumn series at Twickenham marred only by a controversial defeat to New Zealand.

The old enemies were deadlocked at 13-13 entering half-time but blistering tries from Elliot Daly and Joe Cokanasiga opened up daylight before the win became a rout when Owen Farrell touched down in the closing stages.

Apart from losing their way in the second quarter, England dominated the Cook Cup showdown with man of the match Kyle Sinckler, Jonny May and Cokanasiga outstanding.

Victory was secured against one of the poorest Wallaby teams seen at Twickenham in recent years, the tourists enfeebled by the loss of David Pocock to a neck injury and tumultuous build up due to senior players Kurtley Beale and Adam Ashley-Cooper being disciplined for bringing women back to their hotel rooms.

Among the biggest roars of the afternoon was reserved for Manu Tuilagi, who finally made his first Test appearance for two years as a final-quarter replacement having overcome a groin strain.

Once again in an eventful autumn, controversy reigned as Farrell escaped punishment for his shoulder charge on Izack Rodda as the galloping Australia lock approached the line on the stroke of half-time.

It was an illegal challenge that could have been punished by a red card but referee Jaco Peyper - who endured a poor afternoon - declared it was shoulder to shoulder despite protests from the Wallabies.

Sir Clive Woodward, speaking in his role as TV pundit, said "England have got away with that one", claiming a penalty try should have been awarded. Farrell was lucky to avoid censure for a similar hit in the autumn opener against South Africa.

It took just 133 seconds for England to take the lead as Mark Wilson broke from a rapidly advancing scrum and fed Ben Youngs, who took a few steps before supplying May with a simple try.

Australia ran aimlessly at times with only the kicking of Matt Toomua asking any questions and summing up their muddled play was a moment when Scott Sio and Samu Kerevi collided in midfield as they jogged into position.

But taking advantage of Genia's intercept of a pass thrown by Ben Te'o, they made inroads that ended when Dane Haylett-Petty appeared to have crossed despite a forward pas from Kerevi.

Peyper awarded the try immediately and it was only as Toomua was about to take the conversion and the forward pass was replayed on the big screen that the South Africa official called for the TMO's assistance and the score was ruled out.

Peyper blundered again when he gave only a penalty for Rodda's tip-tackle on May but at least England were able to take a 13-3 lead with the ensuing penalty by Farrell.

A brilliant line taken by the gliding Israel Folau helped narrow the gap to three points, but he found the hole between Farrell and Maro Itoje too easily amid a general decrease in defensive aggression from Eddie Jones's men.

Once a large scuffle had died down early in the second half, England surged back in front with a try out of nothing, Farrell seeming to run out of options until Daly began a perfectly-timed run that saw his raw pace sweep him over the whitewash.

Daylight was opened up when an attack down the left was revived by a weak tackle from Haylett-Petty, who bounced off Cokanasiga to create a gap that the powerful Bath wing sped through to score under the posts.

Cokanasiga almost added a second shortly after, catching a high ball and racing off, side-stepping Toomua before being stopped just short of the line. May then a try disallowed for ball in touch.

The result was sealed when Farrell sped through a vast hole in Australia's disintegrating defence, but Folau had the final say in injury time.