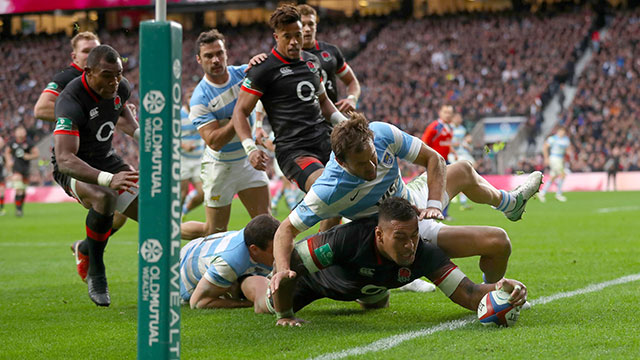 England made a scruffy start to their autumn series but still ensured they will enter their group showdown against Argentina at the 2019 World Cup with an immaculate record against the Pumas under Eddie Jones.

A 21-8 victory at Twickenham gave Jones' men a fourth successive victory in the fixture but it was a disappointing way to open a schedule that continues against Australia and concludes with the visit of Samoa.

It was among the poorest performances under the Australian as - having established a 14-3 half-time lead - they only moved out of sight in the final 15 minutes when Semesa Rokoduguni crossed.

Missing the rested Owen Farrell and Maro Itoje - the former acting as waterboy - England toiled on a poor Twickenham pitch that had clearly suffered from staging the recent NFL matches.

At one point Jones lost his cool, television cameras showing him slam his notebook down and mouth his displeasure - his first public display of anger since taking over in 2015.

England were forced to overcome the 21st-minute departure of Mike Brown after he landed heavily on his head and shoulder after being challenged in mid-air by Joaquin Tuculet.

Tuculet was sent to the sin-bin for a tackle that was either a red card or no offence under the current laws, but the outstanding Nathan Hughes was at least able to maraud over for the opening try in his absence.

Brown's exit presented the opportunity to trial Anthony Watson, viewed as the Harlequins' player's eventual successor at full-back, and he acquitted himself well.

Deputising for Farrell as goalkicker, George Ford proved his accuracy off the tee through three penalties and a conversion - with both missed chances hitting the uprights.

Ford's first attempt bounced off the right post but the Leicester fly-half was more successful soon after to calm his nerves in a scrappy start.

England, wearing their dark grey change kit, attacked with intent off a dominant scrum through Chris Robshaw and Courtney Lawes and in the 23rd minute they were over.

Waves of attacks were launched with quick ball and when the Pumas were stretched Ford fired a long missed pass to Hughes, who stormed over in the right corner.

An ugly spectacle continued to frustrate as neither side were able to build any momentum, play interrupted by a series of penalties, handling errors and aimless kicking.

England went for touch instead of goal in their hunt for a second try but the visiting defence was resolute.

Argentina fought back heading into the final quarter but missed penalties from Emiliano Boffelli and Nicolas Sanchez sucked the life out of their response.

Instead, a counter-attack from England that started with Alex Lozowski sprinting out of his half and ended when Henry Slade found Rokoduguni through a long scoring pass swept the hosts out of reach.

The Pumas had the final say when Sanchez slipped over after 30 phases, ending a flat afternoon.