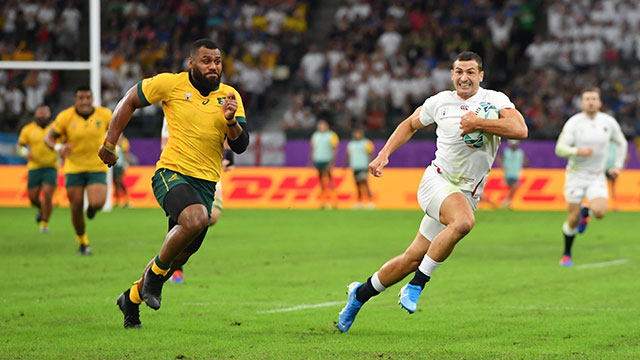 England stormed into the World Cup semi-finals as two tries from Jonny May underpinned a record-equalling 40-16 victory over Australia at Oita Stadium.

May celebrated his 50th cap by touching down twice in the first half but a seventh successive win against the Wallabies was truly founded on a ferocious defence led by man of the match Tom Curry.

Four years ago it was Australia who dumped England out of their own World Cup at the group stage, but their revenge for that humiliation was crushing.

Owen Farrell revelled in his return at fly-half in place of George Ford, with his pass to Kyle Sinckler for the third try showing his class as ringmaster in a return to form for England's captain.

From the kicking tee he was immaculate as four penalties and four conversions made up a 20-point haul.

And in further vindication of Eddie Jones' decision to drop Ford in favour of a more muscular midfield, it was Slade's cunning interception and astute grubber that presented May with his second try.

Australia trailed heavily against Wales and Fiji in the group stage, but having fought back from 17-6 down to within a point shortly after the interval there was to be no escape act in Oita.

The Wallabies’ tactics were often brainless and chaotic and repeatedly played into English hands, summed-up by Anthony Watson’s late intercept of Kurtley Beale’s wild pass that completed the rout.

Any doubt over Jordan Petaia’s readiness for the big stage quickly evaporated as the 19-year-old centre made two impressive early touches as part of a strong start by Australia.

England invited pressure when Slade coughed up the ball in contact, enabling Beale to launch a counter-attack that ended with a Christian Leali’ifano penalty.

But in the space of three minutes Jones’ team had taken a stranglehold on the game by scoring two tries in quick succession, both finished by May.

Manu Tuilagi and Watson were prominent in the build-up to the first before Curry sent May over in the left corner, but the second was opportunism of the highest order.

A loose pass by David Pocock was picked off by Slade and the Exeter centre raced into opposition territory before directing an outstanding kick into the path of May, who scooped up the ball and touched down.

Australia were taking risks, including one ill-advised chip out of the 22 by Beale, and were consistently met by a wall of white shirts that was living up to Jones’ pre-match promise of defending with “brutality”.

Curry was magnificent in one passage of play, turning over a Wallabies attack and then driving Reece Hodge backwards with a muscular tackle as England continued to dominate.

Two bullocking runs from Samu Kerevi punched holes in Red Rose ranks and the threat ended with Leali’ifano’s third penalty, but two minutes into the second half they had reduced the deficit to a single point.

Petaia was instrumental as he grabbed a missed pass, dummied one way before feeding Marika Koroibete who sprinted around Daly to cross under the posts.

England’s response was immediate, however, as several strong carries brought reward when Farrell found Sinckler on a superb line that swept the Harlequins prop over the whitewash.

A scrum penalty kicked by Farrell drove another nail in Australia’s coffin, as did their inability to capitalise on a period spent pounding the whitewash with Will Genia at fault for the lost chance.

Sensing victory was theirs, England finished strongly as a rolling maul drove the underdogs backwards and secured a penalty that Farrell sent between the uprights.

The final blow was landed by Watson as he poached a simple try off Beale’s mistake, completing a resounding quarter-final victory as Koroibete was denied a second try by the TMO late on.