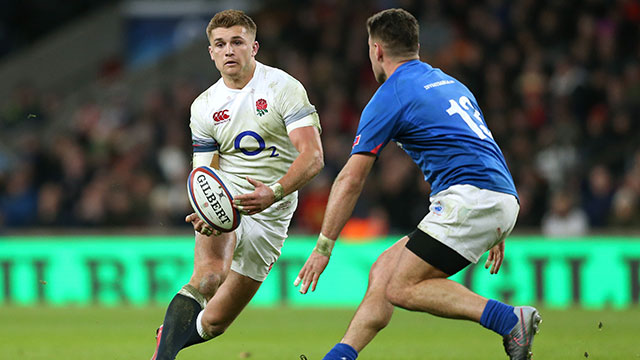 England emerged comfortable 48-14 winners over Samoa at Twickenham to complete a clean sweep of victories from their autumn series, but they toiled for long spells against the Islanders.

Eddie Jones' men entered the seventh meeting between the teams as overwhelming 1/200 favourites and while they were never in danger of losing from the moment Mike Brown crossed after 101 seconds, it was a far from vintage display.

For 31 minutes they failed to add to the 22-7 lead they had built by the half-hour mark and when Elliot Daly touched down to eventually propel them out of the barren spell, Samoa's resistance had been broken.

Nine changes had been made to the team that thumped Australia 30-6 and their final outing this year fell below that standard, although there was no denying the ambition that compelled them to repeatedly turn down shots at goal.

Financially-stricken Samoa have not won any of their seven Tests this year, but there was much to applaud at Twickenham and it was only in the closing stages that they fell apart.

It looked ominous, however, when Brown opened the scoring in the second minute and although Samoa had produced some positive early moments, they were unpicked for a second time when Tim Nanai-Williams dropped a high ball enabling Lozowski to cross.

A botched restart by Ewels coupled with some lazy defence, most notably by Joe Launchbury, saw flanker Piula Faasalele cross under the posts and the Islanders were lifted when ferocious tackle on Lozowski and Danny Care left the backs doubled over in pain.

Samoa looked comfortable when play was ragged but England introduced some structure through two big scrums and a series of forward drives to profit through Ewels crashing over.

Launchbury trudged off with a shoulder injury and Courtney Lawes came on, the prelude to a brief period of Samoan resurgence assisted by a gift of an intercept by Chris Robshaw.

Twice Care was unable to keep hold of final passes as the line beckoned and England were forced into another reshuffle when Jonny May departed concussed, bringing on Rokoduguni in his place.

It was on the other wing where Samoa cracked for a fourth time, half-backs Ben Youngs and Ford combining to send Daly over.

Slade was the next to cross after running on to a flat pass from Youngs as England used their set piece to good effect once more, but Samoa refused to wave the white flag and were rewarded when lock Chris Vui scored in the left corner.

England had the final say, however, when the superb Daly took Brown's pass and switched on the afterburners to evade five would-be tacklers and finish under the posts before Rokoduguni completed the rout in injury-time.