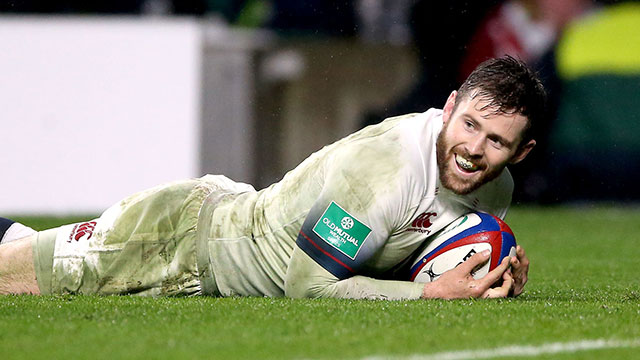 England amassed a fifth successive victory over Australia after running amok in the closing stages at Twickenham to emerge 30-6 winners.

Seven days after Eddie Jones apologised for an expletive-laden outburst in the coaches' box, it was Michael Cheika's turn to rage for a series of decisions that went against the Wallabies.

Referee Ben O'Keeffe sent Michael Hooper and Kurtley Beale to the sin-bin and disallowed tries by Hooper and Marika Koroibete for offside, infuriating Cheika who twice stalked down the stairs to protest to the officials.

England were the superior team and emerged comfortable winners, but they enjoyed the rub of green including in a key moment when Elliot Daly crossed in the 54th minute.

Repeated viewings by the TMO showed the ball that Daly grabbed possibly grazed the touchline, but there was no doubt over the late tries from Jonathan Joseph, Jonny May and Danny Care that buried the Wallabies.

Relentless rain affected handling and no more so than in one second-half passage of play when Australia could have crossed twice but for knock-ons before Daly eventually touched down.

Cheika's claim that England target their half-backs proved incorrect and for spells the Wallabies were bullied as their coach had predicted, but this was to the hosts' credit.

Australia fell apart in the closing stages and the result failed to reflect a contest that remained open until Joseph touched down.

From the start England showed far greater ferocity than seven days earlier against Argentina and a penalty from Owen Farrell gave them an early advantage that, combined with strong runs from Chris Robshaw and Nathan Hughes, contributed to a strong start.

A full-blooded opening quarter continued with bone-jarring defence from both sides broken up by interludes of long-range kicking and at one point Farrell could be heard calling an opponent - most likely Bernard Foley - a "little rat".

Australia saw a try by Hooper ruled out for offside and the fast pace continued with George Ford directing a cross-field bomb to Daly only for a leaping Beale to snatch the ball.

Hooper was shown a yellow card for collapsing the maul and repeated offsides amid a series of forward-led thrusts from the hosts that ended with a second Farrell penalty.

Cheika seethed in the stands as Beale followed Hooper into the sin-bin for a deliberate knock-on and England were making headway by using their pack to bludgeon a route through the gold jerseys.

Reece Hodge landed a monster penalty to set Australia off the mark and they could have taken the lead but for spilt balls from Samu Kerevi and Tevita Kuridrani.

The second of those near the England 22 allowed Jones' men to counter-attack and when Ben Youngs thumped the ball ahead, Daly was able to gather and touch down via a bounce that fell inside the touchline by only millimetres.

Foley booted a penalty and Australia saw a try by the lightening fast Marika Koroibete ruled out for offside against Stephen Moore.

The Wallabies could have drawn level if that score had been given, but instead Joseph, May and Care plundered late tries.