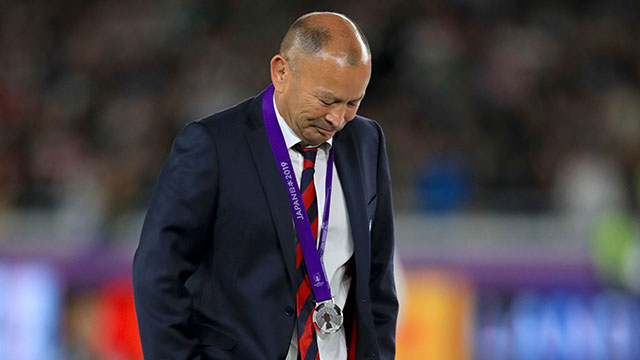 But head coach Jones had no complaints on a day when South Africa dominated every critical area - notably the scrum - and took their chances.

"You can have the most investigative debrief of your game and you still don't know what was wrong," Jones said. "It just happens sometimes.

"It's not a good day for it to happen.

"At the same time, I have got great admiration for what the players did. I can't tell you much how much respect I have got for them.

"That wasn't the outcome we expected. They were worthy winners, they played very well and were too good for us on the day.

"We struggled to get into the game, and when we had opportunities we didn't take them. It was just one of those days when South Africa were too good for us."

England lost prop Kyle Sinckler to a third-minute head injury, and his replacement Dan Cole was given a torrid time by opposite number Tendai Mtawarira.

"He is recovering and will go through all the head injury protocol," Jones said, of Sinckler.

"You have 23 guys, you lose a guy early and you have got to be able to cover it. I don't think that was a significant factor in the game.

"We got in trouble in the scrum - we struggled particularly in the first-half.

"We made some personnel changes in the second-half and got back into it, but South Africa for some reason were too strong for us.

"We didn't think that was going to be the case going into the game, but that's how it happened. That's what happens in rugby sometimes.

"I thought we stayed in the fight pretty well, and 50 minutes into the game we were in with a chance, but we failed to take our opportunities. They took their opportunities, and that was the difference n the game."

Reflecting on England's World Cup campaign, Jones said: "We are the second-best team in the world.

"The players prepared tremendously well for this World Cup. I thought they played with a lot of pride and passion, and we got caught short today.

"These things happen, but we can't doubt the effort of the players. I thought they were extraordinary.

"And then after we have a few beers today, we will probably have a few more beers tomorrow and maybe Monday, and then maybe we will have to pull up stumps.

"I don't know why we didn't play well today. It's one of those things that happens in high-level rugby.

"We thought our preparation this week was good, but at the end of the day it wasn't because we didn't play well.

"We are disappointed we are not the world's best team.

"We finished second - a silver medal is not as good as a gold medal, but I am proud of my players and proud of the way they have conducted themselves in Japan."

England captain Owen Farrell, who kicked all of England's points, said: "We probably came in at half-time thinking we had not fired too much of a shot.

"The second-half was a bit different, it felt like we got some momentum, but probably not enough, and then off the back of it we got caught again and they got the momentum straight back.

"We knew that South Africa were going to come in motivated, and we felt like we were too, obviously.

"In terms of the start of the game, they had a lot of ball in a lot of the right areas and seemed to get a good few calls, and that put us under pressure.

"We didn't seem to be able to get a foothold in the game, and they had a lot of momentum in the first-half.

"They are obviously a brilliant side, and they played brilliantly today."