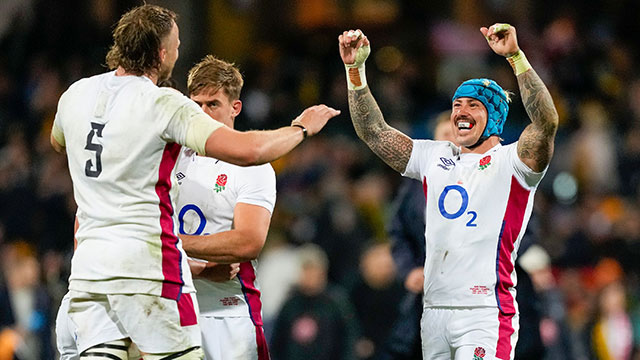 England dug deep to complete a series victory over Australia with a 21-17 victory in the third Test at Sydney Cricket Ground that saw towering rookies Freddie Steward and Tommy Freeman play starring roles.

Eddie Jones’ tourists built a 21-10 lead through tries from Steward and Marcus Smith and the kicking of Owen Farrell, but it began to crumble when Folau Fainga’a crossed in the 66th minute.

But instead of folding as they did in the first Test, on this occasion England showed the resolve to keep the Wallabies out despite sustained late pressure, with Luke Cowan-Dickie and Courtney Lawes combining to secure a critical late turnover.

Until play became tighter in the closing stages, full-back Steward and wing Freeman operated as England’s most dangerous players, using their pace, size and clever running lines to good effect.

There were shades of 2016 when veteran scrum-half Danny Care was hooked in the 37th minute as the price for an error-ridden display that included a charged-down kick, knock-on and missed tackle.

Jones had seen enough and removed Care in the same way he had withdrawn Luther Burrell and Teimana Harrison in the first and third Tests six years ago. On this occasion the change was rewarded with another solid shift from Jack van Poortvliet.

It could be the last time Care is seen in an England jersey given he has only just returned following nearly four years in international exile, and the same fate could face Guy Porter after his defensive shortcomings were exposed.

Otherwise it was a pleasing day for England, whose scruffy end-of-season performance failed to take the shine off a significant achievement that takes the newly created Ella-Mobbs Cup to Twickenham.

Australia had promised to fly out of the blocks after conceding early leads in the first two Tests and they backed up their words with actions as they grabbed the lead through a Noah Lolesio penalty before creating a half-chance down the right.

Both sides made errors freely throughout the first half and it was a mistake that cost them a certain try when Nick Frost split a tricky pass from Taniela Tupou as England’s defence began to shake.

By now Freeman was starting to cause the Wallabies problems and when Farrell found the posts England were off the mark.

Just as Jones’ men were starting hit their stride, however, they were picked apart by a mesmerising try that began when Porter failed to tackle Marika Koroibete in midfield, providing the space for Nic White and Tom Wright to combine until the latter went over.

Porter missed a tackle on Reece Hodge and then Koroibete charged through Care as England waved opposition runners through, although a second Farrell penalty at least kept them in the chase.

Jones had run out of patience with Care’s error-ridden display and replaced him with Van Portvliet; shortly afterwards Freeman began to run amok out wide until Steward pierced the home defence.

Freeman continued to cause problems in the third quarter and England were beginning to take control with a breakaway try from Smith strengthening their position.

Moments after sending Ollie Chessum into space with a short pass, Smith leapt on Lolesio’s fumble which was in part a result of interference from Luke Cowan-Dickie and showed his pace to sprint over.

Crucial tackles from Van Poortvliet and Steward kept Australia out but the line eventually cracked when replacement hooker Fainga’a burrowed over.

England’s lead was now 21-17 but despite the onslaught they were facing, they showed impressive resilience to sweep over the finishing line.