Barbarians to face Samoa as Killik Cup returns to Twickenham 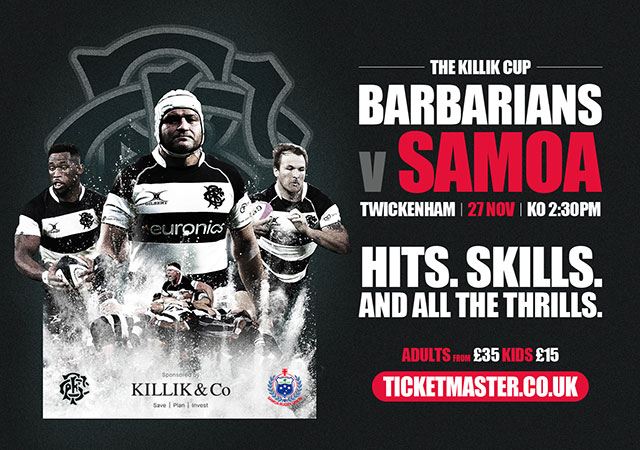 Barbarian F.C. are set to face Samoa this autumn as the two sides meet at Twickenham for the Killik Cup on Saturday 27 November (kick-off 2.30pm). Tickets for the match are available from Thursday 15 April at 10.00am.

It will be just the second time the teams have met, the first being at London’s Olympic Park ahead of Rugby World Cup 2015, which marked the first-ever rugby match at the venue.

The last edition of the Killik Cup took place in 2019, when Fiji edged a narrow 31-33 victory over the famous Black and White with five tries apiece in a thrilling spectacle in front of a 50,000-strong crowd. Rugby legends including Rory Best, Tendai “The Beast” Mtawarira, Mathieu Bastareaud and Makazole Mapimpi turned out in style for the international side.

John Spencer, President of Barbarian F.C. said: “We are very happy to announce our 2021 Killik Cup fixture this November and look forward to welcoming Samoa to Twickenham for what will no doubt be a wonderful match.”

Spencer added: “With our long history of playing with our trademark style of flair, courage, spirit and passion, the Barbarians love lining up against exciting international sides like Samoa and we know this fixture will be an unforgettable rugby experience.

“The Barbarians are also looking forward to welcoming back fans back to HQ for the 2021 Killik Cup, for what always promises to be an electric and unmissable game of international rugby.”

Faleomavaega Vincent Fepuleai, CEO of Lakapi Samoa, said: “Playing the Barbarians is a wonderful opportunity for any nation. They come with a great tradition and reputation and provide a hallmark for fantastic running rugby.”

He continued, “Lakapi Samoa is grateful for the chance to play against such a prestigious team and at such an iconic rugby venue as Twickenham. Matches like these are invaluable to Samoan rugby, alongside World Rugby's continued support to our game with the recent announcement of a Samoan Super Rugby Team.”

The Manu Samoa Head Coach, former London Irish centre Vaovasamanaia Seilala Mapusua, who also played twice for the Barbarians, said: “Playing for the Barbarians was one of the highlights of my career. Their style of rugby gives you the freedom to simply go out and express yourself on the field alongside numerous international superstars of the game.

“So, it is not only a great honour to play for the Barbarians, but a great privilege for the Manu Samoa to play against them too. Fixtures such as these play an important role in the development of players on the international stage and provide fantastic building blocks for Samoa in the run up to Rugby World Cup 2023 in France. The flair of the Barbarians will certainly test our attack and defensive systems and we look forward to entertaining the rugby fans at Twickenham too.”

Tickets will go on general sale on the 15th April at 10.00am from £35 for adults and £15 for children (plus booking fees). Visit www.ticketmaster.co.uk to secure your seat.