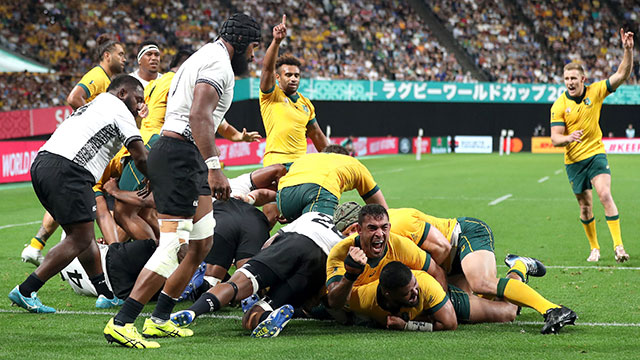 Australia found salvation in their driving line-out as they survived a scare to dispatch Fiji 39-21 in their World Cup opener at the Sapporo Dome.

The two-time champions trailed by nine points until they seized the lead for the first time in the 62nd minute before galloping out of sight, the Islanders unable to absorb unrelenting set-piece pressure.

Two identical tries, that saw hooker Silatolu Latu driven over on both occasions, swung the game and Australia then ran amok against deflated opponents - who knew the mighty World Cup upset they had threatened was gone.

Wales are competing with the Wallabies for top spot in Pool D but there was little on display here to overly concern Warren Gatland's Grand Slam champions, especially as the final scoreline was distorted by Fiji's collapse.

Likewise Australia's possible quarter-final opponents England, whose wily head coach Eddie Jones will have seen his countrymen dominated and rattled until finding the route out of trouble.

Both teams invited early pressure onto themselves but Fiji also shone and, inside 10 minutes, they had built an 8-0 lead.

Australian tacklers were scattered by Josua Tuisova during a rampaging run down the right wing and openside Peceli Yato was on hand to finish the attack.

Fiji were looking the better coached team until Michael Hooper side-stepped over from close range after a series of raids down the left.

It was only brief respite as Fiji renewed their onslaught, harvesting six more points from Ben Volavola's boot, but Australia were far more ruthless in possession and when they next visited the 22 a try was worked for wing Reece Hodge.

The Wallabies needed to settle quickly into the second half but instead they gifted the Islanders their second try as a botched midfield move presented Waisea Nayacalevu with the loose ball.

Shrugging off a tackle, the outside centre ran almost half the pitch to cross under the posts with a swallow dive before being mobbed by the replacements bench, who were warming up nearby.

There was an air of inevitability to Australia's next try as repeated line-out drives ended with Latu crossing and, with Levani Botia sin-binned for killing the ball, they produced a carbon copy with the same player going over once again.

The floodgates were now open as Fiji collapsed, with Samu Kerevi and Marika Koroibete completing a one-sided scoreline that was unkind to the Islanders.