All Blacks come from behind to win Killik Cup at Twickenham 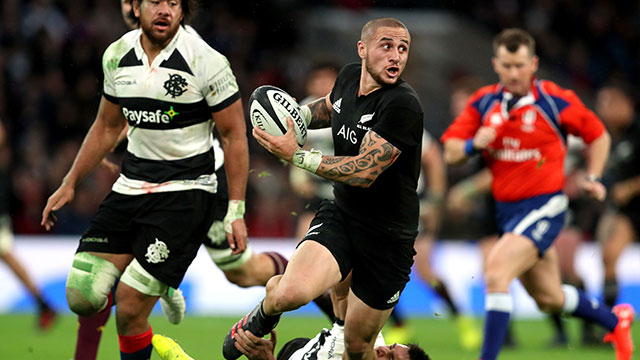 New Zealand provided a chilling insight into their future strength after coming from behind to dispatch the Barbarians 31-22 at Twickenham.

Trailing 17-5 after the invitational club coached by Robbie Deans had raced out of the blocks, the All Blacks ran in four uninterrupted tries in the non-cap international that serves as a curtain raiser to the Autumn series.

The back-to-back world champions, led by Beauden Barrett for the first time, rested the vast majority of their senior players in favour of a team packed full of rookies and prospects that was still able to pull clear in the third quarter.

Only two of the Barbarians' line-up play their club rugby outside New Zealand, Australia and South Africa and their enterprise kept an impressive 62,546 crowd entertained until they ran out of steam.

New Zealand came under early pressure and their line cracked twice inside the opening 14 minutes as first Richie Mo'unga crossed before an intercept by Steven Luatua enabled George Bridge to add the second.

TJ Perenara showed vision and then brilliant reflexes to start and finish the move that saw the All Blacks strike back, but the Barbarians continued to be the dominant force with some typically cavalier play and when Sam Carter drove over they were 17-5 ahead.

A scrum from inside their own half gave New Zealand the platform to respond, with a succession of backs making ground using smart lines and slick handling until Waisake Naholo showed strength to set up Jerome Kaino.

End to end play lit up the early phases of the second half with both sides going close, but the All Blacks found the higher gear they needed to surge ahead.

Inside centre Ngani Laumape powered over from a scrum and two minutes later replacement back row Sam Cane took a similarly direct route to score his side's fifth.

The Barbarians were ragged now and when Tawera Kerr-Barlow chipped ahead for Nathan Harris to gather and cross, they trailed 31-17 and New Zealand were out of sight with Bridge adding a consolation score in injury time.