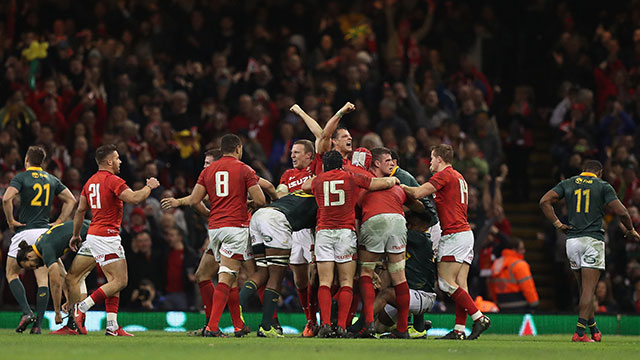 Wales boss Warren Gatland admitted to feeling "a bit of relief" after his team made hard work of beating South Africa in Cardiff.

Gatland's men led by 18 points just before half-time, but they needed a Leigh Halfpenny penalty 12 minutes from the end to secure a 24-22 victory and third successive home win against the Springboks.

"I suppose there is a bit of relief," Gatland said.

"We started so well and looked comfortable, then the five minutes before half-time and five minutes after half-time weren't the best periods of the game for us.

"It was pretty nail-biting, but that is what Test match rugby is all about, and we came out on the right side of it."

But the Springboks produced an unexpected recovery act, hitting back through tries from wing Warrick Gelant, fly-half Handre Pollard and centre Jesse Kriel, while Pollard added a penalty and two conversions.

It left Wales to reflect on an autumn series that realised losses to Australia and New Zealand, plus an ugly 13-6 victory against unfancied Georgia and a win against South Africa that raised more questions than it delivered answers.

Parkes, who only competed a three-year residency qualification period hours before kick-off, was the shining light as he became the the first Wales player since wing George North seven years ago - also against South Africa - to score twice on debut.

"He did OK, yeah," Gatland added, of the centre's performance. "I said to him to make the most of the opportunity, and he did that. He is an experienced player, and he has a lot of rugby under his belt."

Parkes told BBC1: "It's been amazing, a dream come true. I never thought this day would come, and I'm just extremely humbled by the opportunity.

"It's a huge privilege and an honour to come out here and play in front of a fantastic stadium and a fantastic crowd. You dream of these kinds of days, so I am very happy."

Wales faced the Springboks without more than a dozen players through injury and unavailability, although many of them should be back in contention for the NatWest 6 Nations opener against resurgent Scotland on February 3.

Gatland said: "There are lots of things we can take out of this campaign in terms of developing some strength in depth in the squad.

"We've got some options and depth, which is what we were looking for.

"Experienced guys understand the massive step up from regional rugby to international rugby, and those guys who are experiencing that will learn and hopefully get better from it."

Springboks head coach Allister Coetzee was in defiant mood after the game when asked about his future.

South Africa ended their European tour with defeat against Wales after starting it with a 38-3 thumping at Ireland's hands in Dublin.

"The team has really grown and there has been a lot of improvement. The players are hurting at the moment because they feel they let themselves down, and you can only feel like that if you have a good team environment.

"What needs to change? We obviously need to cut out individual errors, which is one massive thing, but this team has grown.

"We have got to give players opportunities to grow and develop. You cannot expect to build Rome in one day. Last year was a fiasco, definitely, so we started from scratch this year.

"The players are much better conditioned than last year, so there is already progress, and I am positive about that.

"We changed our plan in the second-half and clawed back and played really well. We won that half 12-3, and it showed the character in the side."