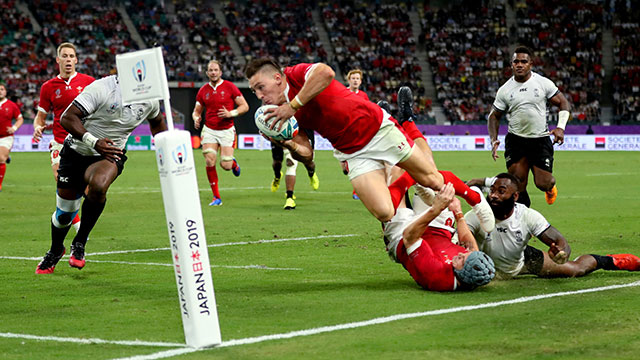 Wales play the third game of their Autumn Nations Series campaign when they tackle Fiji in Cardiff on Sunday.

After defeats against New Zealand and South Africa, Wayne Pivac’s team will look to bounce back ahead of hosting Australia next weekend.

Here, we look at some of the key talking points heading into the game.

Josh Adams – a centre of attention

After 34 starts on the wing for Wales and scoring 17 tries, Cardiff speedster Adams has been switched to outside centre in an intriguing selection by Pivac. It undoubtedly has a 2023 World Cup feel to it, with the Wales head coach, whose squad can carry a maximum of 33 names in France, acutely aware how important players able to feature in more than one position could be. Adams is certainly good enough to have a hybrid role, and Fiji know all about his brilliance after seeing him score three tries against them when the countries last met at the 2019 World Cup in Japan.

Wales scrum under the spotlight

Wales produced some positive moments in their losses to New Zealand and South Africa, but a consistent concern across both games was the scrum. There were issues such as poor technical discipline and execution, although Pivac has retained Rhys Carre and Tomas Francis – his starting props against the Springboks – for Fiji’s visit. Addressing the key set-piece area, Pivac said: “There is work to be done on our side. We’ve come in undercooked.” Wales’ lineout showed a significant improvement in the South Africa encounter and their scrum must now follow suit.

To say that Wales are excited about 19-year-old Exeter forward Tshiunza is a major understatement. At 6ft 6in and 17st 6lbs, he offers a huge physical presence and an impressive versatility that sees him provide a second-row and back-row option. Tshiunza, who is set to make his Test debut off the bench this weekend, was born in DR Congo but moved to Wales in 2010 and is a product of Whitchurch High School in Cardiff, whose past pupils also include Sam Warburton, Gareth Bale and Geraint Thomas. Fiji on Sunday is the start of what could prove to be an outstanding international career.

The history books show that Wales have beaten Fiji 10 times in 12 attempts, drawing once and losing an epic contest in Nantes that saw them knocked out of the 2007 World Cup. But it hardly tells the full story, with four of those victories being by seven points or less, while Fiji led their last meeting – a World Cup pool game in Japan two years ago – 10-0, before Wales prevailed. Fiji’s often devastating combination of unpredictability and blistering sevens-style attacking rugby makes them a dangerous opponent and Wales know they cannot switch off for a second.

Please keep off the pitch

Wales’ Principality Stadium fixtures against New Zealand and South Africa were blighted by pitch invaders. A man briefly stood alongside All Blacks team members ahead of the New Zealand national anthem before he was led away, then a spectator was banned from the venue for life after running on to the pitch as Wales attacked midway through the second-half of last Saturday’s Springboks encounter. Principality Stadium manager Mark Williams said: “It’s extremely disappointing to think that by recent events the traditional game-day experience is under threat and that we might be forced to look at additional measures that will impact on the fan experience in future.” No one can say they have not been warned.