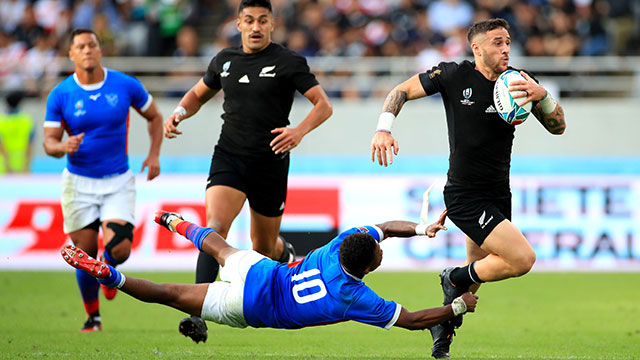 New Zealand's power and class eventually shone through as they wore down brave Namibia 71-9 in Tokyo.

Namibia battled and matched the All Blacks early on and New Zealand led only 10-9 after half an hour before stepping up their game to break clear and run in 11 tries as they won the last 50 minutes 61-0.

Barrett added eight conversions for a personal haul of 21 points.

Damian Stevens kicked Namibia into an early lead with a penalty for hands in the ruck before New Zealand scored their first try after five minutes.

Barrett's cross-field kick was collected by Reece to go in on the right and they went over again midway through the half through Lienert-Brown, who stretched clear of the Namibian defence to touch down.

The Welwitschias continued to battle and compete with the All Blacks and came back to within a point through a pair of Stevens penalties.

New Zealand were reduced to 14 men when prop Nepo Laulala was sent to the sin-bin after making contact with the head of JC Greyling in the tackle.

Prop Ta'avao went over under the posts for his first Test try with Barrett converting.

The bonus point was secured when Smith powered over after a dominating scrum when Jack Goodhue popped the ball up to him to send the All Blacks into the break with a 24-9 lead.

New Zealand broke the game open after the interval with seven more tries.

Moody went over on the right after another domination scrum and Barrett sent over his third conversion.

Lienert-Brown claimed his second try of the game after Barrett weaved his way through a series of Namibian tackles and spun the ball wide for him to touch down.

Reece capped a textbook All Blacks move as they spun the ball wide for the speedy winger to go in.

Captain Whitelock then made it four tries in 16 minutes since half-time when he scored at the base of the upright from another powerful forward surge.

Smith went over for his second try of the game 13 minutes from the end as quick hands kept the ball alive and the full-back crashed over in the corner.

Ofa Tuungafasi became the second New Zealander to be sent to the sin-bin eight minutes from time for a swinging arm to the head in the tackle.

Barrett crossed for the 10th try as New Zealand surged forward after a line-out before Perenara wrapped it up with a stunning effort after picking up a behind the back pass from Brad Weber and surging through three tackles to brilliantly touch down in the corner.