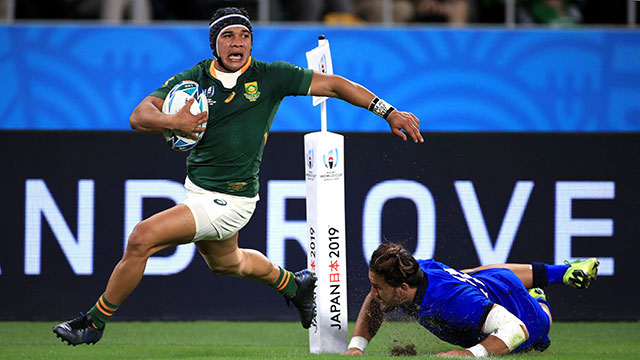 South Africa ran riot against 14-man Italy to secure a 49-3 victory in their World Cup Pool B encounter in Shizuoka.

The impressive Cheslin Kolbe scored twice while Bongi Mbonambi, Lukhanyo Am, Makazole Mapimpi, RG Snyman and Malcolm Marx also got on the scoresheet in a comprehensive victory.

Italy spent the majority of the second half with 14 players after loosehead Andrea Lovotti was sent off for a dangerous challenge on Duane Vermeulen.

The seven-try victory takes South Africa to the summit of Pool B and all but ensures their place in the quarter-finals. However, a late injury to star man Kolbe soured a good night.

The defeat marks Italy's first of the competition and they will now have to beat New Zealand to stand any chance of progression to the knockout stages.

South Africa, who bounced back from defeat to the All Blacks with a strong showing against Namibia, were ahead inside five minutes of Friday's fixture. Following fine forward play by the Springboks, Kolbe found himself in space before skipping into the corner.

With 26 minutes gone, Mbonambi added a second after South Africa won the line-out and the hooker went in from a metre out.

Italy remained in contention at the interval, trailing 17-3, but any chance they had of a comeback were put to bed following Lovotti's dismissal with just two minutes of the second half gone.

Lovotti and team-mate Federico Zani combined to lift Vermeulen in the air before dropping him headfirst to the ground.

Referee Wayne Barnes showed Lovotti the red card, and Zani could count himself fortunate to escape without punishment.

The floodgates opened, with Kolbe doubling his tally after 53 minutes when he pounced on Handre Pollard's delightful cross-field kick.

Am then ran over following a frenetic moment of play to earn South Africa's second bonus point in as many matches, before Mapimpi scored his 11th try in 11 outings for the Springboks.

With Italy continuing to tire, replacement forward Snyman dived over with four minutes left. Marx then scored in stoppage time to complete the win.

The only negative for South Africa came when Kolbe went down with an injury to his left leg in the closing stages.