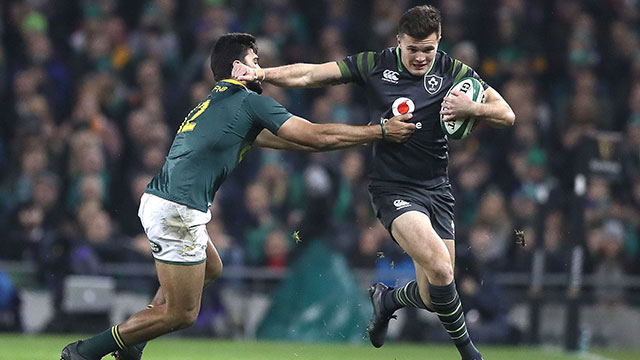 Ireland were too good for South Africa in Dublin, scoring four tries in a convincing 38-3 victory on Saturday.

South Africa look likely to beat Ireland to hosting Rugby World Cup 2023 - but on the field Joe Schmidt's men appear some distance ahead of the rebuilding Springboks.

Rob Herring capped a driven lineout before Jacob Stockdale claimed the final try, as Ireland glossed the score at the end.

Wing Conway excelled on claiming his first try on his fifth Test, the 26-year-old the beneficiary of Ireland's decision to omit Munster team-mate Simon Zebo - who heads to Racing 92 in France next season.

Johnny Sexton booted 14 points at the Aviva Stadium as Schmidt's men oozed calmness against the robust but limited visitors.

Ireland will move on to host Fiji and Argentina in the next fortnight, with hopes fast rising of a November clean sweep.

Debutant centre Bundee Aki hurtled into Test rugby in an emotional dervish, almost crying in the anthems, then pummelling Coenie Oosthuizen in a brutal tackle.

The Springboks prop hobbled off after his knee buckled under the sheer force, and one monster scrum later and Ireland had the lead.

Sexton posted the penalty to settle November nerves, before Andries Coetzee kicked away poorly to botch a try-scoring chance for the visitors.

Fly-half Sexton slotted two more penalties, first with South Africa killing the ball, then when Eben Etzebeth was pinged for kicking at a ruck.

Ireland rocked the Springboks again with the first half's only try, Conway latching onto Murray's bouncing bomb with lightning speed, before haring into the corner for a fine finish.

Sexton hit the post from the touchline conversion attempt, and then Ireland had to cling on.

South Africa punted a facile penalty to the corner, but paid the price when CJ Stander conjured a masterful ruck turnover.

The tourists botched another scoring chance when bungling an overlap, and Ireland carried their 14-0 lead into the break.

A rare error from Stander, a high tackle on Tendai Mtawarira, handed the Springboks their first points on the restart, with Elton Jantjies slotting the penalty.

Stockdale capped a flowing move for the fourth with the game's final play, after smart industry from debutant Darren Sweetnam.